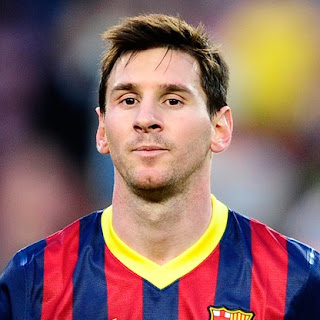 Lionel Messi was born on 24 June 1987 in the city of Rosario in Argentina. When he was given as a young child birthday ball, it had happened to him, from now on, he played every minute it. When the little Lionel once saw his father played with his older brothers in the street football, he wanted to play. He quickly brought it all to marvel, for it was just amazing what the lanky Lionel could do everything with the ball, even though he had never played football properly. Thus, the exceptional talent was allowed to age five his first football club "FC Grandoli" join and there visit the training. Surprising the talented Lionel developed further and moved at the age of eight years in the junior section of the club tradition "Newell's Old Boys."

Lionel Messi was indeed inferior physically his same age peers, but this disadvantage it was like for his indescribable footballing skill again. He had such an explosive pace and such a perfect ball control, he was often to stop only by unfair means. Although he was repeatedly fouled with brutal severity, Lionel Messi was always prudent and played quietly. He punished the opposing team then always with lots of goals. But the rapid rise of a highly talented footballer should be soon shaken by a devastating news.

Lionel Messi: "When I saw my parents cry more often, I knew that something is wrong"

A hormone-related disorder is a rare form of dwarfism was found in Lionel Messi. At age 13, he was not even 1.40 meters tall, and this diagnosis was a shock. With this growth has stopped his football career was endangered because the professional football world had the body of a child no chance. The expensive hormone of about 900 dollars a month could not afford, and the many clubs who wanted Lionel Messi already committed, jumped suddenly from the family. No one wanted to take over the high cost of treatment for an adolescent with such a low height. The father, who was an ordinary worker, did not see any good prospects more in Argentina due to the current economic crisis. He could simply not earn the money that his son needed so badly, and so he had to make a tough decision.

The family risked everything and decided to emigrate to Spain. In the city of Barcelona a new beginning should be started, and also Lionel Messi tried to continue working on his career as a footballer. Despite its small size, he stood in front of the big football club FC Barcelona and managed to participate in a trial. Lionel Messi gave everything to convince the youth coach of his talent. He knew he would not get many opportunities to realize the dream of a big football star can. Although Lionel Messi a head was smaller than any of his teammates, he placed such a high performance culture of the day, that there could not believe his opponent. Because no one was able to separate the fast and lively Lionel Messi from the ball or somehow prevent him to score goals. So a great talent it had not long been added to the traditional youth department of FC Barcelona.

The youth coaches were so impressed by Lionel Messi that they offered him a contract immediately. In addition, the club took over the high costs of therapy, because it was simply convinced of this exceptional talent. For Lionel Messi now fulfilled a big dream, because from now on he could play football in one of the best youth academy in the world. But he still had to survive the hormone treatment, which was very painful. Every day he had to put a syringe into each leg in order to accelerate growth. While Lionel Messi toiled with his comrades every spare moment for a successful football career, no one was with his real agony. Growth accelerated by the hormone treatment in short time very strong, what the body actually took several years. The muscles ached and felt like she would burst. Lionel Messi had overcome many low points, for which he had a lot of patience with the support of the family.

But Lionel Messi fought doggedly, he believed in his talent as a footballer and wanted to do everything we can to succeed. Persistently he gave himself every day his hormone injections, despite the cruelty therapy hit successfully. Lionel Messi grew centimeter by centimeter, and from month to month Lionel Messi was better than footballers. He became increasingly becoming a complete player, he already counted by far the biggest talents in the entire junior section of FC Barcelona. On 16 October 2004, fulfilled his long-awaited dream, at the age of 17, he played his first game in the first team of FC Barcelona. Due to its high speed with the ball and his dribbling he quickly rose to the regulars and one of the best footballers in the world.

Lionel Messi won in the following years with FC Barcelona many major championships, was cup winner and also won the UEFA Champions League. He was FIFA World Player of the Year and has received numerous prestigious awards for its exceptional footballer qualities.

The successes had Lionel Messi ("The Flea") must work hard with the nickname "La Pulga". He always had in mind and had let his goal of a successful professional football player despite years long and painful hormone therapy never be beaten. His perseverance and his unwavering determination were his main pillars for the later ascent to absolute football star. He became a role model for young footballers in the world, because has to succeed to work hard and always believe in its goals.

Lionel Messi: "I have always done everything to fulfill my dream of becoming a professional football player"