Each jump could be my last 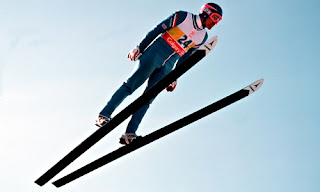 Michael Edwards was born on 05 December 1963 in Cheltenham (city in England) and had to take a very early stage the dream at the Olympic Games. But he was not very talented and athletic had no real talent for a particular sport. This changed when he learned to ski on a hill during a school trip. He trained from now on every free minute, by the way, he successfully completed his training as a bricklayer. But one day he happened to see in a television program broadcast a ski jumping competition. Michael Edwards was so impressed by the daredevil ski jumpers that he immediately decided also to become a ski jumper. Besides ski jumping was even an Olympic competition, this was a perfect fit for Michael Edwards. His friends declared the plan immediately crazy. But Michael Edwards believed that he could actually create. Moreover, ski jumping was cheaper than the normal skiing, because as a bricklayer, he earned not much.

Michael Edwards: "The equipment was cheaper. And to jump off a hill, was much cheaper than a ski pass to purchase "

At the age of 23 years so he bought his first used ski equipment and made first attempts on nearby hills. He had to deal attract more socks to even fit in the jump shoes. People wondered about the strange man, because in the UK there was absolutely no ski jumper, and of course no jumps. But Michael Edwards wanted to realize his dream of the Olympic Games and trained diligently. After a few months he decided to try it on right ski jumps, just as he had once seen it on TV. He moved to Europe for this reason, to improve its ski technique.

Michael Edwards had little money to spend. He slept in the car, in a tent and in cowsheds, in order to save money. By the time he ventured to bigger and bigger hills, though he found it hard to overcome such great heights. But he fought hard and took a short time later in his first official competition. The people were amazed when Michael Edwards showed up for the first time. He weighed about 10 kg more than the heaviest of its competitors and was not as emaciated as his colleagues. He laughed a lot, chatted gaily with viewers and loosened the often tense climate of ski jumpers on. As Michael Edwards was close to his jump, kept the spectators held their breath. Because they had never seen before and they hoped only that he would survive his jump notwithstanding a crazy guy.

Michael Edwards: "I was different from the other jumpers. They were always serious, I have ever laughed. They were starved, I very well fed "

Each jump of Michael Edwards was associated with a significant risk, because he was strong farsighted. He had also during the jump wearing strong spectacles that fogged permanently. The competitors from the ski camp could not believe it, this time to Michael Edwards still blew shortly before his jump his glasses, so he could see anything. Despite reduced visibility, he threw himself bravely in the run-up track and raced to the edge to jump. Although it was a very shaky and unstable jump, but Michael Edwards made it, of course, many meters behind its competitors in order to land safely. He finished by far the last place, but as he ever took the first Briton in a ski jumping competition, meant its small size at the same time British record. And with this jump, he was the best British ski jumper in his country and was actually qualified for the Olympic Games.

Michael Edwards: "I was scared. Each jump could be my last "

So could Michael Edwards at the 1988 Winter Olympics in Calgary (Canada) to participate. There he again shocked all those responsible with his shaky jumps, but he had become an incredible fan base behind him, who supported the trained masons. Michael Edwards finished in the competitions, although again only the last places, but by his courage he was now ascended to the absolute crowd pleaser. Under the nickname "Eddie the Eagle" ("Eddie the Eagle"), he participated in the closing ceremony and nearly 100,000 spectators welcomed the fearless ski jumper from England so euphoric that all other athletes marched into the background.

Michael Edwards: "These were seconds in which I guessed what it means to be a superstar. I felt like a champion "

Michael Edwards jumped then on, however, he no longer was able to qualify for another Olympics. Because after his participation in the Olympic Games, the access rules have been greatly exacerbated, now you had some of the best athletes of his sport in order to be able to qualify. This regulation was created only because of Michael Edwards, she went down in history as the "Eddie the Eagle Rule".

A simple Maurer realized his dream of the Olympics. Although Michael Edwards was always ridiculed, he worked persistently and purposefully for his goal. He managed to move up to a legend in ski sport and became one of the most famous Olympians, the United Kingdom had ever produced. Although he was far from successful, but there were qualities of courage and bravery with which he was able to jump into the hearts of men.

Michael Edwards: "The one who rouses himself, no matter what is to always be among the winners. The only losers are the ones doing something wrong out of sheer fear, sit in their chair "