Edward Bach: "Do not fight, but recognize and overcome them" 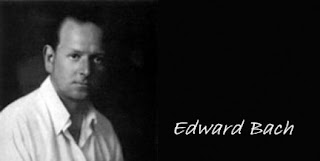 Edward Bach was born on September 24 in 1886 in the small village of Moseley near Birmingham (England) and discovered very early his love for nature. As a child he spent every free minute in the open air, and wandered alone through the diverse natural realm. For hours he watched this plant, trees and animals, he was always seized with a great feeling of happiness. Due to this sensitivity he showed during his school years a deep compassion for every sick creatures on earth. Edward Bach wanted to be a doctor because of this and dreamed of one day a healing power to discover what could cure all diseases.

At the age of 20 years Edward Bach began to study medicine, which he successfully completed a few years later. He then went through several departments in the hospital, but was not satisfied with the treatment. Although improved the health of many patients, however, it turned out that this recovery did not last long in many cases. Edward Bach began specifically to examine the intestine and the intestinal bacteria, which he was able to determine a direct relationship with many chronic diseases. First publications about Edward Bach made very well known, but his researches were interrupted abruptly. At the age of 31 years, he suffered a severe hemorrhage and fell into a deep coma. When he awoke from a coma after an operation, gave him to live only another three months the doctors. After the initial shock Edward Bach decided to use the few weeks of life it to find a means for the "true" cure.

Edward Bach: "The main reason for the failure of modern medical science is that it deals with effects and not the causes"

Edward Bach experimented tirelessly with the intestinal bacteria and worked day and night. But through his extensive research he completely forgot his fragile health and actually he repressed all negative thoughts about it. After three months, Edward Bach stated that there was no health no worse, but even getting better. He concluded that his love for the work to find his good state of mind and his strong-willed determination to find a cure for the people, a decisive factor for his good health was. The vaccines, which Edward Bach won from the intestinal bacteria, have been a great success. However, there were diseases, which responded to no treatment and where the vaccine had no effect. One day Edward Bach first came into contact with the writings of Samuel Hahnemann, the founder of homeopathy.

Edward Bach realized that there were significant similarities between homeopathy and his own discoveries. Especially had impressed him with this is that the remedies were mainly to be found in nature, they consisted mainly of herbs and plants. He decided now completely focus on herbal medicine and to seek appropriate herbal remedies. He noted most of his patients, that many physical ailments were caused by ill mental stress. Edward Bach began therefore to look to nature for plants which could resolve the psychic incoordination again. He relied on his sense of nature and began to assign flowers and plant parts to various emotional states of people. The meaning of Edward Bach were sharpened and he began more and more to feel the forces and the vibrations of the plants. His body reacted to the plants concerned so sensitive that he saw the effect in a positive and negative sense immediately. Day and night he worked meticulously in the right composition and tested as long se or his patient until the respective disease symptoms actually disappeared.

Edward Bach: "Do not fight, but recognize and overcome them, for the complete recovery occurs only in ourselves. Heal the soul, not the disease "

Edward Bach recorded extraordinary healing successes with its Bach flowers. He discovered that the people with negative moods such as anxiety or despair lacked a certain energy. This lack of vibration offset the Bach flower remedies, thereby influencing the emotions of the people positively. This inner harmony the real cause was fought successfully for a disease. Edward Bach had dismantle the great vision, the fear of physical illnesses and to provide a simple system for mental health care. However, this great dream and the triumph of his Bach flower remedies he should not live to see.

Edward Bach died on 27 November 1936 at the age of 50 of heart failure. His whole life had been dominated by the search for suitable remedies for the people and he invested it all his belongings. His inner urge and his instinct made him go this way, which has never been a physician passed away before him. Because when his scientific intellect no longer brought him, he confided to his sensitive intuition. The positive effect of the Bachblütentherapie spread over time across the globe. Edward Bach was his unique way of thinking about one of the greatest explorers of the natural healing process.

Edward Bach: "Disease will never really heal with the currently applied materialistic methods or can eradicate because its origin is not in the material world. Because what we call disease, is only the physical end result of the ongoing ministry of deeper forces "