The counterfeiters, the biggest state secret of the Nazis

Adolf Burger: "Of course I wanted to help, when it comes to human life" 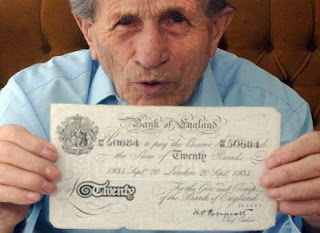 Adolf Burger was born on 12 August 1917 in Großlomnitz (Slovakia) and grew up in a poor family. At the age of 14 he was apprenticed as a printer, where he could learn the craft to perfection. Due to the persecution of Jews and the rising power of Adolf Hitler more and more Jews were deported from Slovakia and brought to the dreaded concentration camp abroad. It was not long until the secret resistance movement approached the print shop to issue fake baptismal certificates, so that they could protect the Jews from the concentration camps. Adolf Burger did not hesitate and saved many people by false documents life.

Adolf Burger: "Of course I wanted to help, when it comes to human life"

But the Slovak Gestapo (secret police) came to them soon on the ropes and Adolf Burger was arrested as well as his colleagues at the age of 24 years. In Auschwitz extermination camp (Poland), he had to endure a lot of cruelty and brutal torture with the prisoner number 64,401th Then Adolf Burger, however, was transferred to the Sachsenhausen concentration camp in Germany, where he was needed by his learned occupation as a printer. What he did not know at that time was that his wife was executed in the gas chamber.

Adolf Burger came in a specially separated area of ​​the concentration camp, which was also surrounded by barbed wire and guarded around the clock. The windows in the barracks were tinted white, which no one could see inside, additionally secured 1000V high voltage wires this mysterious place. Adolf Burger soon knew the reason for this massive security arrangements, because in the two blocks 18 and 19 were huge and highly modern printing machines. Here banknotes, passports and other important documents were forged, which should serve the National Socialist German Reich. The establishment of this counterfeiting workshop was personally approved by Adolf Hitler and did not even know of the camp commander, what was going on. Adolf Burger now knew one of the largest state secrets of the Nazis.

Adolf Burger: "The Nazis were not just murderers, but also quite common criminal counterfeiters"

Adolf Burger knew that this work would eventually end in death because nobody was able to experience something of the secret counterfeit workshop. Even sick people were shot immediately, so they do not divulged little delirious. Mainly British pound notes were printed in order to flood the British economy with counterfeit money and thus to bring the international monetary system to fall. Strictly shielded from the rest of the world had the counterfeiters work tirelessly for the German Reich, but Adolf Burger and a few other workers managed nevertheless to resist despite the strictest security measures.

The counterfeiters were brave enough to delay the note printing and sabotage. Under dread defective banknotes were printed on purpose, which could not be put into circulation by the lack of quality. The prisoners made it so that millions of counterfeit notes did not come into the hands of the Nazis and were used for the war. As the Allies moved closer towards the end of the war, the counterfeiting workshop was unceremoniously shipped off to a concentration camp in Austria in order to produce further here. But it should not happen, because shortly after the relocation, the prisoners were freed with Adolf Burger by the American army.

When Adolf Burger came home, he discovered that his parents were deported and murdered. He thought of the many inmates who voluntarily threw themselves into the high-voltage lines and died because they mentally coped death of their relatives. The war had also taken him within a short time his favorite people, but he wanted to fight. He collected photographs and documents and made it his life's work to make available its experience with other people. When in later years some people actually began to play down the mass murder in the concentration camps, Adolf Burger began to engage publicly. He gave lectures and visited numerous schools, where he continued his terrible experiences in the concentration camps told more than 100,000 young people, so that they were not forgotten.

Based on his memoirs, the story was about the counterfeiters filmed ("The Counterfeiters"). The film was sensational awarded in 2008 with an Oscar, but most prisoners from the former forger command no longer saw the movie, because Adolf Burger was one of the last survivors. It was the memory of the largest known counterfeiting action which ever conducted in the history and the life-threatening opposition from some courageous counterfeiters, making additional bloodshed could be prevented.

Adolf Burger: "I have sworn to myself, to survive, to report on the Terrible, so that such a thing never happens again"