The liquidators of Chernobyl Disaster 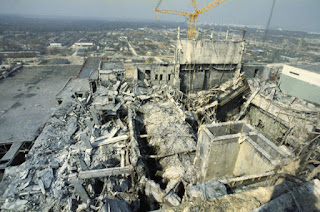 On 26 April 1986 in Chernobyl (Ukraine) one of the worst nuclear accident in human history occurred. Shortly before the accident should be tested whether during a power outage, the energy of the turbine could be used to generate electricity. This planned test but soon ran out of control. Safety regulations were not adhered to, there was a risky reactor concept, and also human error were considered reasons for this misguided experiment. When they still tried to shut down the reactor, it was already too late. First pipes began to burst and the chain reaction accelerated instantaneously. There was a huge and powerful explosion, which destroyed the over 1,000-ton lid of the reactor core, the reactor core was no longer complete and radioactive matter came directly into the atmosphere. The worst case scenario was underestimated at the beginning, the nuclear experts reported no current threat to the environment.

Residents in the towns and villages surrounding the nuclear power plant did not suspect an imminent threat. In deep breaths they breathed a radioactive dust, children went to school as usual and some onlookers looked at the power station over to the fire brigade in fire fighting watch. But the firefighters were powerless against the atomic glow, just like the helicopter, which yielded sandbags over the reactor. Suddenly out of the blue collapsed firefighters and volunteers and the pilot was still in flight dizzy. The invisible danger showed its effects, because these were the first symptoms of acute radiation sickness. Among the workers there was also the 22-year-old Nikolai Bondar, who had to leave as a reservist of Marine his family to help in Chernobyl.

Nikolai Bondar: "At this time, no one had suspected what really happened there, everything should be hushed up and kept secret"

As five volunteers were sought for a dangerous mission, it got a lot of helpers to do with the fear, because the risk of death was significantly. Nikolai Bondar but answered immediately, his sense of duty was very strong, also to protect his family. He and his colleagues had the radioactively contaminated cooling water pumping, which was located directly under the burning reactor. When the reactor came into contact with the water, there would be an effect like a hydrogen bomb, and the land within over 500 kilometers would have been additionally contaminated. And so went Nikolai Bondar with its workers and with simple rubber suits on the dangerous road, drain the water. They already knew of the dangerous radiation, so they also did not receive radiation measuring instruments, because they would anyway be displayed only exceeding the upper values. Everywhere splashed contaminated water on them, and it even came under the coveralls, which offered more than lack of protection. Nevertheless, it managed the men to join the giant tubes under great danger, and the water was finally pumped.

After this mission Nikolai Bondar came together with his colleagues immediately to a hospital for examination. Although several signs of contamination were there, they were only marked "almost healthy" dismissed without further assistance and without any further medical care.

Nikolai Bondar was just one among the many first responders (liquidators) in Chernobyl, which were in use. Hundreds of thousands of clean-up workers were on duty to evacuate residents to carry out decontamination work and to perform the required safety measures. And this because of the high radiation exposure with fatal consequences. Many workers died a few days after the accident or later to the long-term consequences of the dangerous radiation. Cancers, cardiovascular diseases, circulatory disorders and many other harmful effects on humans were the result, which was significantly decrease the average life expectancy in the affected regions. Also, because it is to this day always comes to miscarriage and many children still are born with severe disabilities.

People like Nikolai Bondar it was thanks to them that the misfortune did not turn out worse. Together with the other first responders he rescued immediately and in distant future many lives. Up to two orders that you gave him for bravery and boldness, but he received no further support from the government. This fate he shares with many others liquidators who are fighting today for just satisfaction the Government.

For his work as a helper in Chernobyl Nikolay Bondar has paid with his health. Today, he is a very sick man, all his organs are contaminated with radiation. He always has a suitcase with drugs here, it needs to survive. Nevertheless, he continued visiting funerals, which are reminiscent of the severe accident in 1986. The survivors, who he meets there are from year to year fewer and fewer. Many are sick and are still dying from the consequences of the nuclear disaster.

Nikolai Bondar: "I do not regret that I have saved my family and millions of other people"