Anita Moorjani: "I could feel my soul left my body" 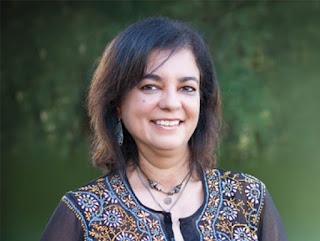 Anita Moorjani was born on March 16, 1973 in Singapore (Southeast Asia) and grew up in a very religious family. However, it came with age, more and more in a psychological conflict, since they did not want to settle for the minor in their cultural role as a woman. So they not only got problems at school, but also difficulties with her parents, who wanted to persuade them to an arranged marriage. Anita Moorjani alienated over time from her home, made its own vocational training and often stayed at abroad. Although they achieved financial independence, but she took the life of her family a constant. Thus they had little self-confidence and had also constantly afraid not to meet the demands of her family.

Anita Moorjani: "In mind, always nagging feeling of being somehow inadequate, the feeling of having failed"

Anita Moorjani built a life of its own, but only outwardly they seemed to have a perfect life. At the moment of her marriage she should promptly provide in their culture for young, however, Anita Moorjani felt not yet ready. Inwardly, she was torn apart by the pressure of expectations of their closest environment. In addition to these conscience doubt the next disaster came into her life when the doctors diagnosed her with lymphoma. Anita Moorjani underwent intensive medical treatment, but only with limited success. Lemon Large tumors spread throughout their body and their life force was becoming weaker. On 02 February 2006 she fell into a coma and emaciated organs began to fail. The doctors informed the family that she had to live only a few hours and there was no more hope. However, Anita Moorjani was not dead because they just saw the most incredible moments in their lives.

Anita Moorjani: "I could feel my soul left my body"

Anita Moorjani was located at a place where there was more than she could have imagined in their wildest dreams. This place was filled with indescribable love and all the borders and blockades seemed to dissolve into thin air. Anita Moorjani could see and hear talks, which led her husband with the doctors in a 30 meters from the hallway, which was actually impossible. Profound insights they flowed through, about human existence, the duties on the ground or the real cause of disease. Anita Moorjani showed how diseases on an energetic level started before they appeared only in the human body. You also recognized the cause of their own suffering, because her constant fears and worries had been a perfect breeding ground for cancer.

Anita Moorjani realized that they could defeat the cancer only with a loving inner wellbeing. She was shown that people with drugs were indeed treated, but they were exempt only from physical illnesses. However, the negative energy remained mostly in the body, which is why diseases came back again and again in a way. Anita Moorjani saw life now from a completely different perspective, she felt an intimate connection to all living things and saw the great possibilities which were open to everyone. Now she realized her true purpose in life and decided to share this knowledge with other people.

Anita Moorjani: "I was flooded by an all-encompassing, unconditional love-energy. This love exists for us, no matter what or who we are "

After more than 30 hours could not believe those responsible, as Anita Moorjani suddenly awoke from a coma. But even more, they were amazed when Anita Moorjani could all treated doctors list, as well as the discussions which had taken place outside the room. Due to their physical condition except she knew details of what the hospital staff just could not explain. The true miracle happened when the tumors conspicuously declined within a few days, and Anita Moorjani was completely healed after a few weeks of her cancer. The doctors could not understand this spontaneous healing and subjected Anita Moorjani numerous tests, all of which brought no satisfactory result and puzzled doctors left behind. Anita Moorjani, knew that she had resolved by their near-death experience, the fear and sadness in their hearts and only for this reason again was perfectly healthy.

Anita Moorjani: "Our true nature, the essence of our life, the mind can never get sick"

Anita Moorjani now shared their knowledge, they wrote books and gave lectures around the world. Your poor emotional state was the cause of her cancer, only when she changed her mental well-being, they could defeat their terminal illness. With its history Anita Moorjani were many people with terminal illnesses and serious accidents new hope in their lives. Because with the help of the mental and spiritual source of strength to the people opened new ways and opportunities to experience healing.

Anita Moorjani: "If we knew how perfect and magnificent we are, there are no hospitals and prisons.