I prayed for them and it worked! 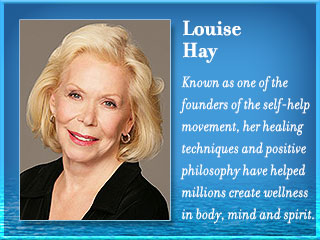 Louise Hay was born on October 08 1926 in Los Angeles (USA) and grew up under difficult conditions. After her parents divorced, she was already a little kid for weeks to other foster care because their impoverished mother had to look for work. The situation did not improve even with her new stepfather, who treated them badly and emotionally and physically abused. In times of great economic crisis, Louise Hay lived in abject poverty in the midst of bad people. Although her childhood was already hard enough, she was sexually abused at the age of five years, from a neighbor, which tore a deep psychic wound in the heart of the little girl.

At the age of 15 years, the embittered Louise Hay dropped out of school and ran away from home. As a waitress she was now trying to build a new life, until the time when she became pregnant unintentionally. She had only a low self-esteem due to their previous life, she gave her baby up for adoption free and fled to Chicago to stay there with poorly paid jobs of all kinds. After she moved to New York, but it seemed to go uphill in their lives. She married a respected businessman and also began to work successfully as a model. But when she left her husband after a few years for another woman, their laboriously constructed world collapsed again. Louise Hay stood in front of the ruins of their existence, as a casual visit to an event that changed their lives forever.

Louise Hay sat in the First Church of Religious Science, where a spiritual lecture took place. There they heard of the lecturer a sentence, which they no longer should let go. "If you're willing to change your thinking, you can change your life," Louise Hay was immediately excited by this announcement and began to deal more with the science of the mind and the spiritual philosophy of life. She devoured books on how one could change the material circumstances and heal the body with positive thinking. Louise Hay was trained to pastor and increasing numbers of people sought advice from her how you could come up with positive thoughts to a happier life.

Louise Hay: "At some point, then more and more people came to me. They told me about their problems and I prayed for them. And it worked! "

While Louise Hay was able to help many people seeking help, she fell ill even cervical cancer. After careful consideration, they concluded that their torturous childhood had to be the cause of cancer and rejected in advance any medical attention from. She devoted herself intensively their unprocessed childhood experiences and realized that still put great indignation and anger in her. Louise Hay put her diet in order, detoxified their bodies turned to reflexology and working on the most important for them point to the forgiveness. Supported by linguistic phrases (affirmations) constantly placed positive powerhouses in their consciousness and managed after a few months in fact the great miracle. The cancer retreated completely and Louise Hay was again in good health.

Louise Hay: "Every time you think a thought, currents various chemicals through your body. Either they poison the body, or they strengthen your immune system. Thought is everything "

Strengthened by their unusual to recovery began Louise Hay, the diseases attributable probable causes and offer healing affirmations. Now she realized her life's work and decided to carry out this important message to the world. When she began to write about her experience, she was not yet aware that they should therefore affect the lives of millions of people. Because with the book "Health for Body and Soul", she managed not only its international breakthrough as an author, but it was also the best-selling live-help book in the world.

Louise Hay: "Since I have put my foot on the spiritual path, my life was no longer the same"

Louise Hay had to overcome many obstacles in her life. But the fact of how they could cope with the darkest periods of their lives successfully with their positive attitude towards life, many people gave new courage and hope. She got by on the recognized model and showed that you could really affect health and your well-being with loving thoughts. This was her simple but effective message, which Louise Hay made the world a better place.

Louise Hay: "Be thankful! The universe loves grateful people. Our thoughts go out into the universe and return as experience back. So we create our future "