Why must kill animal? 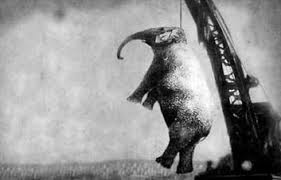 Early 20th century witnessed the circus heyday in society. The number of circuses increased in this period by leaps and bounds and the crowds flocked to the circus tents to be entertained by unique performances. Exotic animals were part of the basic equipment and the mighty elephants were among the big stars. The traveling circus "Sparks World Famous Shows" and Mary was away, a five-ton Asian elephant. However, most of the time had to stay in cramped cages and learn any tricks with a violent dressage elephant.

In dealing with the elephant, the circus people were also often poorly trained, which led to frequent fatal accidents repeatedly. On September 11, 1916, the circus just in Tennessee (USA) was on his way back as an accident occurred. For Mary some nurses was organized, which had no idea of ​​elephants. When this temporary worker behaved the elephants against wrong, Mary responded with panic elephants rammers and the nurse was killed. Since the circumstances of this accident were unclear, soon spread wildest rumors.

The fact peaceable Mary was presented by the press as an evil monster that supposedly had many workers on his conscience, which of course was not true. The incitement against the elephants increased further and so decided the ringmaster, to give in to public pressure and to be put to death Mary. There were various options discussed, how to kill the elephant, and finally sat down by a particularly brutal method. The ringmaster wanted to let the elephant hang around with this spectacle even to advertise his circus.

So Mary was taken by train to a nearby town, where already waiting for a huge industrial crane. Before the eyes of thousands of onlookers to put Mary a chain around his neck and slowly began to pull up the frightened elephants. But suddenly yanked the chain and Mary fell to the ground, where she broke her hips with a loud crash. The downed elephant remained motionless and terrified lying on the ground. Then you put Mary a second and even thicker chain around his neck and pulled his ton elephant back up. It took several minutes for the excruciating agony of the elephant was finally over, and departed the life out of the body of Mary. The corpse was then buried beside the railroad tracks.

The tragic story of Mary spread through various shots far beyond its borders. It was not enough to entice the elephant from the natural environment and to humiliate a lifetime. Finally they hanged the helpless elephants still on and gave Mary by a cruel death, just because you could not deal properly with the elephant. The hanged elephant is still regarded as a symbol of animal abuse and many people deeply in the heart, to stand up for the protection of animals.