A sad true story about an elephant 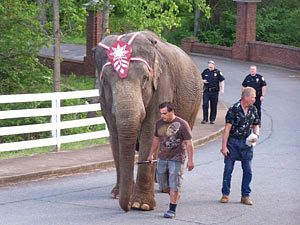 As Tyke was a baby, she was captured by hunters and taken away from her family. The little elephant came now into a circus to Honolulu (Hawaii) and had to be trained in order to offer people an entertainment show can. For the people meant a circus fun and enjoyment, but for the Tyke carefree life was over now. After all, what was going on behind the scenes in the circus, was a real ordeal.

While it had been accustomed in the wild elephant, for kilometers to march, the little tyke was chained and locked up in a narrow space. This unnatural and hostile environment of the elephant was now delivered an unscrupulous trainer, which was responsible for Tyke. Immediately began the coach, tormenting the elephant with cruel torture methods to teach obedience Tyke. With a sharp metal stick ("elephant hook") he struck the defenseless elephant, especially in the sensitive areas, such as behind the ears. The dresser pursued only one goal, to break the will of the elephant using hard power to make him docile.

The pachyderms had no chance to defend themselves against the brutal training methods. Tyke was deprived of any aspect of a normal elephant life, she spent most of the time in aching chains and they stand in their own filth and excrement. It was only a matter of time before the coach could teach the elephant tricks. Tyke learned the trainer forced to obey, because a refusal had severe beatings and whippings result. The audience was thrilled by the performances of Tyke, but nobody knew how bad it really was the elephant. Through additional feed withdrawal has ensured that Tyke the commands actually executed.

So the years went by and Tyke eked out a miserable existence. They constantly had to endure painful blows on her sensitive skin, the wounds healed at that very badly. Tyke was so scared that she started to cry every time her violent trainer showed up. But she had no chance to fight back and had to go through the long hours of torture. After 20 years of unbelievable agony Tyke had reached a point where they simply could no longer bear the abuse and it came to the great catastrophe.

During a presentation Tyke fell back into their natural instincts and Broke. Mad with rage, and the years of humiliation they completely lost his temper and hurt her coach fatal. The elephant broke through all barriers and then managed to escape in downtown Honolulu. The flight of the elephant was but short-lived, because soon the police had surrounded the animal. Immediately pierced 86 balls tired body of the pachyderm, which collapsed in agony and died a short time later. Tyke had no chance, their quest for freedom and a life without fear and pain was hopeless in this hostile world.

Tyke was after her death a tragic symbol of a senseless and agonizing keeping of wild animals in circuses, the pictures of fleeing people shocked all over the world. The harrowing story of the elephants were the many captive animals a voice, that every living being has a right to live in freedom.