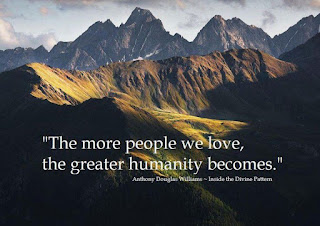 During a charity dinner for students with learning difficulties the father of the child gave a speech that will soon forget none of those present. He told the following story:

Shay and I had once walked past a park where some children who knew Shay, played baseball. Shay asked, "Do you think they let me play?" I knew that most of the boys someone like Shay, physically and mentally handicapped who had come to the world, did not want to have in their team, but as a father I also knew: When my son was allowed to play, then this would give him a sense of belonging, after which he has so longed, and also the confidence to be accepted by others in spite of his disability. So I went to one of the children on the field and asked, without too much to expect if Shay could play.

The boy looked around for help, saying: "We have already lost six laps and the game is just the eighth inning. I do believe that he can play. We will try then to let him come to bat in the ninth inning. "Shay struggled over to the bench of the team and retired with a big grin on a jersey of the team.

I watched with tears in his eyes and warmth in the heart. The boys saw how I rejoiced because my son was allowed to play. At the end of the eighth inning, Shay team had won a couple of rounds, but was still three behind. In the middle of the ninth inning to Shay put on a glove and played in the right field. Although no punches came his way, he was thrilled that he could be there, and began to smile when I waved to him from the stands. At the end of the ninth inning, Shay team took a point. In the current starting position of the next run was a potential Siegesrun, and Shay came next in the series. Would they leave the club at the moment Shay and thus the chance to win the game put, in jeopardy?

Surprisingly, Shay was given the bat. Everyone knew that a hit was all but impossible because Shay did not even know how to hold the bat properly, let alone know how to hit the ball. As Shay but stepped to the tee point, noticed the pitcher that the opposing team is not just appeared at this moment of victory from being, and threw the ball so careful that Shay could at least meet him. The first pitch Shay fluctuated somewhat awkwardly to the side and hit over. The pitcher went back a couple of steps forward and threw the ball gently in the direction of Shays. As the pitch came in, Shay dove for the ball and hit it deep down pulled back to the pitcher.

The game would now be equal to an end. The pitcher picked up the ball deep and had him can throw to first baseman without effort. Shay would be kicked out, and the game would have been finished. But instead, the pitcher threw the ball over the head of first baseman and out of reach of the other players. From the stands and both teams resounded: "Shay run going! Run going! "

Never in my life Shay had gone that far, but he made it to the first base. Wide-eyed and a little surprised he rushed along the baseline. All shouted: "Run along, run farther!" Shay took a deep breath and ran awkwardly, but proudly continue to reach your destination. As Shay rounded the corner to the second base, the right fielder had the ball. He was the smallest boy on the team who now had his first chance to become the hero of his team. He could throw the ball to the second baseman, but he understood what the pitcher was doing, so he threw the ball deliberately quite high and far over the head of the third baseman.

So Shay ran like delirious to third base, while the runners circled the stops to go home before him. All now shouted: "Shay, Shay, Shay, run further, run on." Shay reached third base because the opposing shortstop came running to his aid and had turned him in the right direction of third base, and shouted, "Run to ! Third, Shay, run to third "As Shay had managed the third base, were all players of both teams and the spectators on their feet and shouted," Shay, run home! Run home! "Shay ran home, stepped on the plate, and was hailed as a hero of the day, who had reached the Grand Slam and won the victory for his team.

"On this day", so said the father, while he had tears running down my face, "brought the players from both teams a piece of true love and humanity into Shays world."

"Shay did not experience another summer more. He died the following winter, but he had never forgotten what it was like to be a hero, and how it felt, embraced on that day by the mother through her tears to be when he came home. "