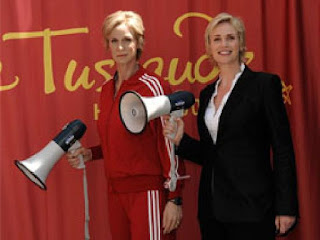 Marie Grosholtz was born in December 1761 in Strasbourg (France) and grew up in poverty. Her father was a soldier and died before she was born, ostracized by society could expect to live in absolute poverty Marie and her mother. So her mother had to work as a housemaid in Dr. Philippe Curtius suppose to come somehow to make ends meet. This earned his living with the Wachsbildnerei, and he was so successful that he soon moved to Paris, Marie and her mother he took. Dr. Philippe Curtius made now often life-size wax figures and began the construction of its own wax figure cabinet. Little Marie was immediately enthusiastic about working with the wax and looked every minute, Dr. Curtius in the manufacture of wax figures on the shoulder. This felt very quickly the enthusiasm of Marie and began to introduce them gradually into the secrets of Wachsbildnerei.

Marie was a hardworking student and realized very quickly the craft. How prepared the wax, formed the head and had to use eyes, hair and teeth properly. Very soon it became a valuable assistant of your Ausbildners and through their special talent, she created soon first own models. With the help of their teacher Marie got access to the French aristocracy, where he received more orders. They modeled a lot of celebrities and royals. Marie was popular through her talent and her great dexterity in the waxwork manufacture anywhere and was at the royal court in Versailles a welcome guest. However, unlike the good life in high society discontent grew in the poorer sections of society, and the carefree life should be over for Marie soon.

When in 1789 the French Revolution broke out, started for Marie perilous times. Members of the royal family and many friends of hers at the royal court were killed. The created by it of wax heads of the celebrities were impaled on poles and paraded through the streets, so that they could be publicly ridicule. Through their contacts with the royal family had to Marie fear for their lives, but she had a keen sense of the threatening situation and responded immediately. Now made of wax heads of (dead masks) of the decapitated victims, since these could no longer be put on display to quickly decayed and. Many people were killed by the guillotine (Köpfmaschine), and Marie was repeatedly witness this horrible method of execution. Among them were killed the King Louis XVI. and his wife Marie Antoinette.

And so survived Marie terror with many nightmarish experiences. She married Francois Tussaud engineering, with whom she had two children. Marie Tussaud inherited after the death of her former teacher whose waxworks collection, but the economic times were bad. The people were starving and the customers for their waxworks were missing, in addition she separated from her drunken husband. Marie Tussaud ran into financial difficulties, because suddenly she could not make any more money than Wachsbildnerin. And so they put it all on a map and tried a completely new start. 1802 she traveled with her eldest son and her waxworks to Britain, her second son she took later after.

Marie Tussaud was now placed in a foreign country completely on its own, in addition she was a single mother. Now touring as a circus woman across the country, showed their wax figures at inns or in meeting rooms. From morning to night she was sitting at the cash register or led the visitors through the rooms to present their collection. At night, they made new wax figures so that their show was always up to date. Madame Tussaud, as it was called from now on, had a special talent for the needs of people. So she made early on figures from members of the British royal family, who were soon very popular everywhere. Despite some setbacks Madame Tussaud fought doggedly, she made independently advertise their wax figures and informed the newspaper about innovations. This paid off and Madame Tussaud became known over time throughout the country. Nearly 30 years she led this difficult and exhausting nomadic life, their methods of manufacture waxwork they improved constantly on.

In 1835 Madame Tussaud made in London station, immediately after their arrival hundreds of visitors already stormed their exhibition. The railway made it now possible that people who lived further away, were visited her waxworks, they no longer had to travel to their audience. And so Madame Tussaud decided at the age of 73 years already, to open its first own museum, which quickly became a famous attraction in London. Madame Tussaud wrote shortly after her memoirs and handed the museum her two sons, which further led to the owner.

Madame Tussaud died on 16 April 1850 aged 88 years. The last waxwork who created them, was her own image of her waxworks.

Madame Tussaud was struggling with many resistors in life. They barely survived the terrible time of the French Revolution and went as a single mother without money in a foreign country. In a time when women had actually no place in the business world, they built single-handedly on a meaningful business. Through their business acumen she understood very early to transform the lifelike wax figures in an interesting story, and so to attract people under its spell. Today all are in the world, the waxworks "Madame Tussauds", the foundation for this was laid a woman who walked through life adventurous and always firmly believed in their beloved wax figures.