Erika Leonard: "My ambition is to write a story that appeals to the people" 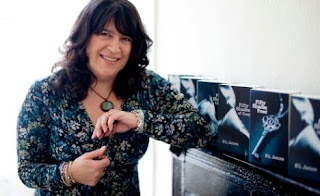 Erika Leonard was born in 1963 in London (England) and was already dreaming since childhood of becoming a famous writer. But it urged other things in their lives, so that the letter came more and more into the background. She married, had two children and tried way to push their careers in professional life, to make money. Soon she had to pursue no more time to her great passion, because as an employed mother she was every day fully occupied.

And as time passed, Erika Leonard took care of the children and the household, by the way they drive their careers in the profession successfully. She was already a production manager at a TV station, where she was responsible for a variety of entertainment shows. She was very good at her job, but she was not happy with it. Erika Leonard was rarely challenged and could also not express their creative imagination. In 2008 there was a fateful turn in her life when she first saw the vampire movie "Twilight". Immediately, she devoured all the books of this vampire saga and was so fascinated by this romantic stories that she decided to devote himself to writing again.

Erika Leonard: "It was a world in which I could plunge. I have longed after writing "

They immediately bought a desk and began to write on a romance novel. Erika Leonard wrote an extraordinary and unusual story, as she had always wanted, finally they could live out their creativity. Her husband supported her in this endeavor, because if his wife was happy, he was happy. Erika Leonard had a specific style of writing, which she strengthened through music. When she wrote erotic scenes she heard sexy songs, but when they wrote fighting scenes, they always heard loud and aggressive songs. It was all her own approach to put their thoughts into words. She was now so engrossed in writing that they even neglected their friends in order to continue working on her book can.

Erika Leonard: "I've been dreaming all the time. And it's very good that I was now able to channel my reverie "

After many hours of work it consistently Erika Leonard had managed, she had completed her first book, entitled "Fifty Shades of Grey". They published it now as a digital book (e-book) on the internet and actually found a small publishing house, which published its story. But there was no money on advertising to present the book to the public, and so there was no great expectations about possible sales of her book. Erika Leonard was happy anyway, their goal of a self-written book she had achieved. Shortly thereafter she published two more sequels of her book, but what they should trigger a hysteria with their stories soon, was hard to imagine.

The love story was about the student Anastasia Steele, who fell in love with the attractive billionaire Christian Grey. Anastasia Steele went through a rollercoaster of emotions, as Christian Grey had special sexual inclinations and they fell to him more and more. Erika Leonard wrote of a dream world via a simple girl and a billionaire, she met so especially in the hearts of many women. Your romance spread for this reason in the women's world like wildfire. By referring people and many discussions on the Internet, her erotic novel has become one of the most popular books in the world, which all topped the bestseller lists. Even the film industry took notice of her book to film this love story.

Erika Leonard: "My ambition is to write a story that appeals to the people. I really want to tell a story, put my imagination into words "