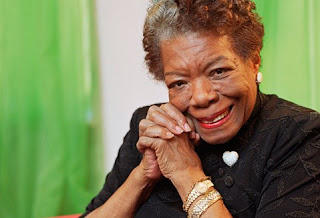 Maya Angelou was born on 04 April 1928 in the city of St. Louis (USA). At the age of three years, her parents divorced, and she was sent together with her brother to live in the southern state of Arkansas grandmother, as neither the mother nor the father wanted to take care of them. The small children were simply labeled as luggage and sent alone on a long journey by train. Unlike their parents, the grandmother took care but caring for the children, Maya Angelou went to school and was able to visit various dance classes in her spare time. Nevertheless they already got as a child with the racial discrimination because they like her family, was dark-skinned.

At school she had the consequences of racist oppression experience, black children were constantly discriminated against. Maya Angalou not understand this injustice, and they also did not understand why a white dentist simply refused to treat her bad tooth. Nevertheless, the grandmother tried to teach the children the traditional African values ​​and always believing in the good in people. After four years, the children's grandmother sent back to her mother, because the brutality and racism grew increasingly, and the grandmother wanted to protect the children from. However, this should have fatal consequences for Maya Angelou.

At the age of eight years, the young girl was sexually abused and raped by the friend's mother. After Maya Angelou made this terrible act publicly, this was in addition ill-effects. As a relative of her learned of this abuse, they beat the friend's mother to death. Maya Angelou was in shock, because suddenly she understood that a man was killed by her words. The young girl now knew no way out and was silent from now on they said not another word. The violation of their bodies, the trauma of rape and the death had been too much for the little girl.

Maya Angelou: "The power of my words has brought someone to death"

Maya Angelou deal now with a lot of books and poems. She read plenty of William Shakespeare or Edgar Allan Poe and found also support in their difficult situation. They took the fantasy world of books to deal with their own past, but she remained in that time continues silently. The girl discovered her love for literature and developed in this period of silence in addition an extraordinary memory and learned many stories and poems by heart. Only after more than five years, at the age of 13 years already, Maya Angelou regained the strength to speak. She went to high school and tried the way to make money. Although she has been discriminated against in the workplace because of their black skin color, she fought successfully against it again and again, so it was as the first African-American streetcar in San Francisco (California). But her life took a decisive turn back, when she became pregnant at age 16 and soon after leaving school brought her son to the world.

Maya Angelou: "I've learned, no matter what happens, or how bad it looks today, life goes on and tomorrow will be better"

As a single mother, she participated in various jobs, she worked as a cook or a waiter in nightclubs. It was a turbulent time, she danced and sang on stage in order to earn their livelihood and can not slipping into poverty. Maya Angelou was looking for a place for them in a spiteful society, because a single black woman with a child was not really accepted. To see more of the world they went some time later with a South African freedom fighters in Africa and worked there as a teacher and as a writer, the way she studied several languages. When she was back in America, she worked for the civil rights activist Martin Luther King, to fight social injustice and racism, by the way, she wrote books and poems about it. When Martin Luther King was assassinated, however, it was exactly the day on her birthday, Maya Angelou was devastated. But in her greatest pain, she decided to publish an autobiography about her life story in several volumes. The first part: "I know why the caged bird sings" was published in 1970.

Maya Angelou: "Really good we can be something that we love only. Do not have the money to your destination, but pursuing the things you like to do properly. And they Mach as good as you possibly can "

The stories of an African American woman in a racist society they made known abruptly. Maya Angelou is, their adventures and experiences to write so captivating that it received recognition for world understood. She got numerous awards from universities and literary groups, since they also repeatedly published fascinating poems. Maya Angelou now began openly to fight against social injustice, she has lectured and taught at schools.

From a silent girl with partly terrible tragedies was one of the most influential writers of her time and one of the most important people in the fight for human rights. Maya Angelou was a role model for millions of people, they showed people that it always pays to never give up in life, no matter how bad the situation was in life.

In 1993, she was allowed at the inauguration of the then US President Bill Clinton perform a poem, because Bill Clinton was a very avid reader of their works. In 2009, she read a poetic work of her at the funeral of the famous musician Michael Jackson. In 2011 she was honored with the highest civilian award of the United States of America, with the "Presidential Medal of Freedom" ("Presidential Medal of Freedom). This recognition was her personally handed over by the US president Barack Obama. Maya Angelou died on May 28, 2014 aged 86 years.