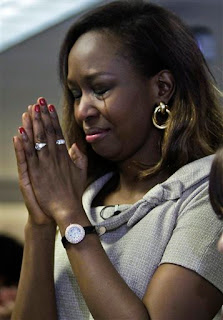 Immaculée Ilibagiza was born in Rwanda, a small and poor country in East Africa. Together with her siblings, she had a happy and comfortable childhood, they were always supported by their loving parents. She went to school and was allowed to go later to the College, where she was very successful. From her parents she was always so educated that every human being was worth much the same, no matter what origin he was. But not everyone shared this view, because in Rwanda there were two main tribes, the majority group of Hutu and the minority Tutsi. For many years there have been conflicts between the two ethnic groups, and this hatred there was in both camps many extremists. It was about power and property claims, again, there were murders and bloody battles in both camps.

Immaculée and her family belonged to the minority Tutsi, although it was not really important to them. But constantly called Hutu followers to eliminate the "Tutsi cockroaches" and this hostility was on 06th April 1994 reached its sad climax, as the country's president was in a plane crash, which was shot down, killed.

Immaculée Ilibagiza: "Suddenly everything was closed in the country. We were told that nothing could be done, no work, no bank, no markets should open "

All border crossings were immediately closed, and no one from the people of the Tutsi escaped more because radical Hutu supporters gave the Tutsi minority to blame for the murder of the president, although this was never cleared up today. Soon followed by reports that Hutu followers killed entire families of Tutsi, including the children. The people in the hometown of Immaculée got it with scared because they heard already of a hit squad that was also on the way to them. In a daring action, the parents sent the 22-year-old Immaculée at the last moment to a Hutu priest, where they could hide. It should be the last time where they should see their parents alive.

Immaculée Ilibagiza: "There have been many pastors and priests, people hidden. It was really a matter of personal faith in God. It was no longer a question of which group you belong or this and that "

Immaculée was immediately in a small 90 x 120 cm large bathroom, hidden behind a closet, hiding. Together with seven other women and children, they now had to remain in a confined space in this tiny hiding place, under fear of death. Again and again penetrated a killer in the house of the clergy, to search for victims and to kill them. Immaculée was praying to God that they were not discovered, and in their faith they found the only stop in this terrible situation. They constantly heard noises from outside and hustling steps, it was a game of hide to the death. But what happened at the same moment with innocent people from the Tutsi tribe, who could not hide, was unimaginable. Because belonging to the Hutu police, the army and even large parts of the Hutu civilian population made relentless hunt for the Tutsi minority to wipe them out forever.

Immaculée Ilibagiza: "We ate, slept and were silent. We looked at each other, did not even know each other. But the strange thing is, when you're in trouble, you know you are human. We are people and laugh and cry about the same things. And that is what counts "

Everywhere roadblocks were erected, where Tutsi were retrieved from the refugees and were shot immediately. A veritable manhunt began with horrible rapes, mutilations and torture. Some victims have been gradually separated in order to increase the pain body parts. Children were abused in the eyes of parents and brutally slain. Large crowds were rounded up and burned alive in buildings, other bodies were simply thrown to the beasts to be devoured. Men, women and children were indiscriminately with spears, machetes killed (long knife) and hand grenades. Only when more and more refugees fled the country, responded the international States on these genocide, but since it was already too late.

During the three-month period of the Civil War almost a million people were slaughtered. Radical supporters of the Hutu majority killed about 75 percent of people living in Rwanda Tutsi minority. The number of raped girls and women was estimated at up to 500,000, many sick thereafter to AIDS. The majority of casualties were immediately buried in mass graves to prevent epidemics. Most offenders could then be caught and convicted, but many criminals also managed to escape abroad.

When Immaculée after three months was finally able to leave their hiding place, she found shelter in a refugee camp. She was emaciated and had lost more than 20 kg, but she had survived. Soon after, however, she learned that her entire family was killed in Rwanda. Their carefree life, as she had done it before the massacre, was now gone forever.

Immaculée Ilibagiza: "On the first night, I learned that my entire family had been murdered: my mother, my father, my two brothers, my grandfather, my grandmother, uncles, aunts, neighbors, friends and classmates. It was like the end of the world "

Immaculée could not believe all this tragedy, only faith in God helped her to endure this horrible fate somehow. A few years later she left the country, emigrated to the US and became a mother of three children. She now works at the United Nations (UN) in New York as part of a development aid for their homeland Rwanda.

The desire for revenge against the murderers of her family and the terrible genocide could overcome actually, because they learned to forgive. Because she understood that many perpetrators were just blinded by hate and did not know that their actions were wrong and it is now no further helped when she was just out for revenge. She realized that she would never be happy and could see into the future, if they could not complete with the trauma. And they even visited the murderer of her mother in prison to forgive him and to bury their enmity.

Immaculée Ilibagiza: The greatest thing I experienced here was how the bitterness I always felt, and the wrath of such a big load of me fell. The greatest miracle was that of forgiveness "

Immaculée Ilibagiza witnessed moments in life that are hard to imagine. Despite the bloody massacre and the murder of her beloved family, she managed to forgive the murderers. She founded the "Left to Tell Foundation", the charitable projects in Africa supported. She wrote books on how she survived the genocide in Rwanda, and how they managed to return to a normal life. Immaculée Ilibagiza holds around the world talking about the mass murder and their attitude toward forgiveness, so that the hatred between people is less. Because if this courageous woman can not give up hope and forgive, then each person can be awarded in the world. In 2007 she was awarded the "Mahatma Gandhi reconciliation and peace price".

Immaculée Ilibagiza: "I have understood what it means to be thankful. Being thankful for the sun, the moon, the wind. I realized how much we have often and we just ignore it. Today I say to everyone, no matter what they are going through, there is always hope and love "