I begged the doctors to give me a shot 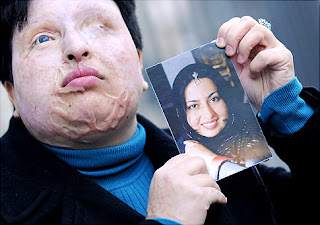 Ameneh Bahrami was born in Tehran (Iran) and was woken and fun-loving young woman. Like most enlightened women in Iran, they did not stand directly against the inflexible and rigid Iranian system with their old and traditional roles, but took over again small liberties. She wore fashionable headscarves where her black hair sometimes came to light, and from time to time she painted discreetly. She worked for a company of medical technology and the way she began to study at the University of Tehran. Ameneh Bahrami dreamed of the great love and an independent and autonomous life, like many young women in their country. Suddenly, a young Iranian student began to woo her.

It was the unassuming Majid Mowahedi who had fallen in love with the pretty woman. He began to harass and to jostle to draw attention to themselves Ameneh Bahrami. He tormented her with calls and pursued them for months through the streets of Tehran. The family of the devotees also stood behind the man, because they are noisy tradition believe that the woman had the man simply to obey. But Ameneh Bahrami would not hear of the harassing overtures, because she wanted to find her own true love in life. They reported the stalker to the police, from the nothing could do, as long as no force was used. One day, after numerous rejections further towards her admirer, he lurked Ameneh Bahrami in front of their workplace. If he already could not impose his will, then he wanted to destroy their lives at least.

When the 26-year-old Ameneh Bahrami made that day on the way home, the worshipers from behind crept up to her, threw her sulfuric acid in the face and ran away. The acid burned like fire in her face, her arms, hands and her cleavage were heavily corroded. Immediately rushed passersby, but nobody could help the screaming in pain young woman. The doctors at the hospital could not do much at the beginning as well for them to stop their infernal pain.

Ameneh Bahrami: "No pain medication could alleviate my suffering. I even threw me against the wall, because the agony was so unbearable. I begged the doctors to give me a shot, so I die. Ultimately, however, began all the drugs to act "

From now on, the carefree life of Ameneh Bahrami forever was over. Her face was completely disfigured, the pain she had to endure the whole body were hardly imaginable. A woman who had been barely recognizable from the attractive and pretty girl. Her face was completely torn from the acid and she lost both of her eyes. Among the many scars all over his body came the certainty that they would be instructed in their lives from now on always help. She moved to Barcelona (Spain), where they had many surgeries to put up with in a special clinic. Her face had the now-blind woman always cover, because people screamed in terror when they saw the terrible face of hers. Ameneh Bahrami wanted to take revenge on the perpetrators, who had done it all, and went before an Iranian court. And that what she was doing was unimaginable.

There was the principle of retribution in Iranian law, must in case of intentional injury to the offender the same thing happened as the victim. And the court gave her after lengthy negotiations actually right, her tormentor to the same fate, we can also perform it. After this verdict, there were massive protests from human rights organizations around the world and even the Iranian government, which was worried about their image, their suggested not exercise this right. But Ameneh Bahrami only felt deep hatred towards her tormentor, and this was also evident.

The culprit Majid Mowahedi showed no remorse and boasted in prison even with being on all front pages. As for the first time he saw her disfigured face in the courtroom, he just laughed scornfully. He told her that she could marry him now that another man would not find them anymore anyway. This intransigence hurt Ameneh Bahrami very, but now they should her tormentor can also take the eyesight by an acid, and everything was already prepared for this act. But in 2011 they stopped at the last moment their retaliation and told the man no longer wanting to punish. She had the thing on purpose to taken to the limit as a warning to all men, who wanted to hurt women in Iran.

Ameneh Bahrami now lives in Spain. From the family of the perpetrator it is still under threat, as they see the fault in her. Because if she had covered her beauty better, she would have the worshiper can not watch so and it would never have come so far. To date, neither of evildoers, nor his family has apologized to her. The perpetrator was sentenced to a prison term of 12 years and fined.

In its day, pretty woman Ameneh Bahrami will remain disfigured forever and severely disabled. Nevertheless, they showed size and spared the perpetrators who destroyed her life forever. Through their tireless fight in court they were many women in Iran hope. For such terrible reprisals against women existed until now only one more year prison sentence, and this startled many men do not from using violence against women. Since the court ruling that women at the men also could retaliate, no more appalling attacks against women have been conducted.

Ameneh Bahrami had been buried at an early age their life plans. But by their exemplary fight she gave many women the hope not to let it get out of the men and to be true to themselves. Because today is according to Iranian law, a woman is still only worth half as much as a man.

Ameneh Bahrami: "I want to ensure that no one experienced what I've been through. I want to deter potential perpetrators "