Freedom will always be precious 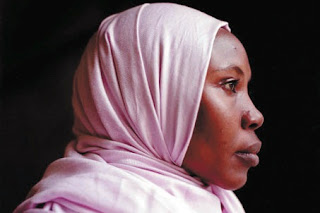 Mende Nazer was born in a small village in Sudan (North Africa). Far away from Western civilization, she experienced a happy childhood with loving parents. It was quite a simple life, but Mende Nazer loved nature and was with her girlfriends always responsible for fetching water and collecting firewood, as well as she could go to school. The highlights in the village life were traditional festivals and celebrations, but there were also painful rituals. So she had a young age already a painful circumcision (FGM) to go through, which was regarded in the village as a matter of course. In general, the co-existence of people of helpfulness and caring was marked, solitude was a foreign word in the village and the community has always been in the foreground. These childhood should be over for Mende Nazer soon, because in the country ruled repeatedly war-like conditions. And so one day fell brutal militias in the village.

This raid was to offer cruelty hardly. The men had their throats cut and the women raped. The village was pillaged and put the huts on fire. The children had no chance and were kidnapped by the invading robbers, to accommodate them in a slave camp. Along the way, the majority of young girls were raped by the brutal criminals, without any consideration. Among them was also Mende Nazer, who had to join this cruel ordeal with only 12 years. From the slave camps of Mende Nazer was sold to a wealthy family in the Sudan as a slave. The young girl, who had previously spent carefree childhood in freedom, did not know if her family and friends were still alive and was now placed entirely on your own. But the most terrible years in their lives were to follow.

Mende Nazer was completely deprived of their identity, from now on it was called only "Yebit", a slave who was not worth it to carry a different name. Sleep they had in an old cottage in the garden, without a blanket and some comfort. During the day they had to clean, wash, iron, and the children of the house supply, to eat there for them only leftover residues. From her strict mistress she was constantly beaten and humiliated, she never had a good word for the hard-working girls left. Even the dogs were treated better and had a much higher priority than they. The house she was never allowed to leave, they had no contact with the outside world and with each passing day was Mende Nazer robs a piece of their soul, until it really felt like a real slave. She was lonely and missed the security of her family and her village. To have had free After years of humiliation without pay and without ever a day Mende Nazer was the hope of a better life already abandoned when she was suddenly sent to London, where she was to serve in a diplomatic family for a sister to her mistress.

In London, meanwhile 19-year-old Mende Nazer without pay had to again do the same work as in their home country. Soon they had to realize that they are here also had no freedoms and again the house was not allowed to leave. When she was also called by the name "Yebit", she fell into a deep depression and felt let down by the world. Mende Nazer was very desperate and already harbored suicidal thoughts, as a surprising message gave her new hope. She learned that her parents were still alive and had the brutal assault of his time actually survived. With this new knowledge she drew back force and planned with the help of a compatriot their escape. Mende Nazer was very afraid and trembling all over. They just brought out the garbage and wanted to take their chance to escape after all these years. As if struck by lightning, they ran away from their prison and from her old life. But the nightmare of Mende Nazer should finally be over now?

The right of residence of Mende Nazer in England was not yet clear, for she had no confirmation of stay. And suddenly she received the terrible news that their application for asylum has been rejected. A return to Sudan could mean her death, and so she tried to fight on bravely. Against the odds and with the help of a journalist, she published her moving story in a book (slave - Trapped Fled tracked). And indeed this was shocking work an absolute bestseller. The British authorities had not reckoned with the pressure of the public and human rights organizations that now support all Mende Nazer. There was obtained a resumption of its procedure and in 2003 it was actually recognized as a refugee and deportation could be prevented.

Mende Nazer today lives in London as a free man. She published a second book entitled (Freed - The homecoming of the slave), where she was able to return after a long time due to a peace agreement in the Sudan again and her parents saw again. She struggles today tirelessly against child trafficking and slavery in their country of birth. In her home country she has become a heroine, because finally someone in the world opens his eyes that there are still many young slaves, in Europe and everywhere in the world, and that in the 21st century.

Mende Nazer: "Freedom will always be precious to me. She is a beautiful and unique gift "