Crystal Renn: "I have starved myself" 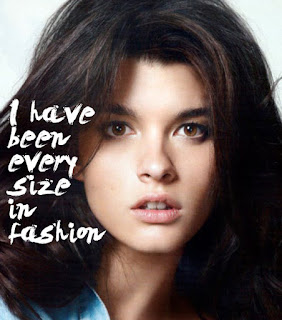 Crystal Renn was a young and fun-loving girl and spent as many other children fine and normal teenage years. It operated sports and regularly took part in piano lessons. This cozy life but should take a quick end to the age of 14 years when she was approached by a surprising model scout. This meant that she had the makings of a supermodel and showed her pictures of famous models. Crystal Renn could not believe it, that young girls not dreamed of becoming a famous model before? They now had the great opportunity to realize their dream of a big modeling career. There was only one catch, according to the judgment of its discoverer had to decline sharply, as they simply was too thick for a model. Crystal Renn took this advice to heart, they had from then on only the super-slim models that were known all over the world, in the head.

Crystal Renn: "If you say one, that the cost of the big wide world is a diet, then you grab this opportunity, without thinking about it"

From another on the day they now began a strict diet in order to meet the requirements of a model can. She held out her diet completely around, ate more salad or steamed vegetables and munching in between on sugarless gums around. In addition, she ran up to eight hours of sport a day, she went to work for that reason to separate in two different gyms and shuttled back and forth between them in order not to attract attention as a sport addict. At age 16, she had heruntergehungert at a height of 1.75 m to 42.5 kg, and now hurried from casting to casting, to make the breakthrough as a model. It was only a matter of time until the first side effects should stop by their unhealthy lifestyles.

Crystal Renn: "I have starved myself. I was so obsessed with my weight, that I am almost crazy when I sugarless gum specially treated myself "

She suffered from impotence, depression, stomach pain and respiratory problems. Had your body. Through their eating disorder simply no energy left, but Crystal Renn had only the dream of a top model in front of him, ignoring the warning signs of her body She began to swallow stimulant diet pills to keep awake with caffeine. Shortly afterwards, this ignorance should retaliate because her young body began to rebel. Despite the hours of sport and strict diet Crystal Renn gained weight. She tried frantically through a dangerous zero-diet and with even more sports to counteract this, but to no avail.

Crystal Renn: "I think I have my body fought for so long that he has signaled to me at some point: It is enough, I can not, I'm starving. My body has saved me through the weight gain "

Your agency tried to impart even further, but again. Only on the condition that they had to take off And suddenly went Crystal Renn light on, because they could no longer go on. She was on the way, themselves and their bodies completely ruining and endangering their health. Crystal Renn did not want to think the day of calories and how they could get rid of them. Far too late they had noticed that they had actually no longer felt comfortable in their own bodies and this was probably also the reason why they arrived not as well received by the clients. And so they began again to eat normally.

Crystal Renn: to have "An eating disorder is a cold, dark place. No one understands you. You lose your friends, your relationship with the family and also to reality "

It took months to Crystal Renn again managed to completely change their eating habits and to reach their new ideal weight. But over time, they had much more energy again and beamed back from an incredible joie de vivre. They moved to an agency that also conveyed oversize models and tried here their dream as a model still to realize. And suddenly came more and more orders for them, all customers were so fascinated by Crystal Renn, the enthusiastic all customers with their confidence newfound. The biggest fashion magazines in the world began now to book at them, the designers and photographers swarmed only as of their immense sensual charisma.

Crystal Renn: "I think it is a matter of broadcasting. At that time I hated my body, and the came over, even when the shootings "

Crystal Renn managed by an anorexic model to one of the most famous plus-size model of the world. She pointed to her example, that each person should make his health before the success. Crystal Renn gave up hope of one day becoming a famous model, until they actually managed. And she reached it as the woman who she really was and wanted to be really.

Today Crystal Renn is fighting with all its might against the anorexia and the Abmagerungswahn in the fashion world. She is a role model for women around the world and gives them hope that they can still be successful with a healthy relationship with food. She introduces herself as against the entire fashion industry, which wants to hammer the company again and again that only thin and emaciated models can be successful.

Crystal Renn: "Meanwhile, I have met some girls who have told me that they would also work thanks to my example in this sector and not agonize over losing weight. Such encounters mean a lot to me "