Cesar Millan: "It's a long way to make people aware of what makes a dog really happy" 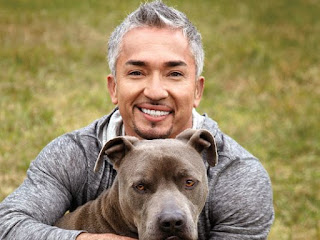 Cesar Millan was born on 27 August 1969 in Mexico and grew up on the farm of his grandfather. At an early age he developed a special bond with the animals, but most of all to the dogs. The dog responded very positively to the special charisma of Cesar Millan and followed him everywhere. The other children began to mock Cesar Millan soon as it dealt only with stray dogs, they called him "El Perrero" ("Dirty dog ​​boy"). Cesar Millan tried this constant taunts against him as best he could ignore, because he was just as fascinated by the dogs as the dogs from him. He had now set an extraordinary goal, because he understood the behavior of the dogs already so good that he wanted to be the best dog trainer in the world.

But life in Mexico was hard, Cesar Millan worked in agriculture and had to accept low-quality jobs, where he was also able to earn very little money. By the way he dealt more with the dogs and brought through this practical experience a lot of knowledge about these animals in, but he knew he could never realize his dream of a dog trainer in his home. And so Cesar Millan put it all on a map and walk through the age of 21 years illegally in the United States one, like many other poor Mexicans also. Here Cesar Millan wanted to fulfill his dream of a successful dog trainer, but he was now in a foreign country where he did not know anyone and also did not speak English.

Cesar Millan has now homeless again. He worked in agriculture or worked as a dishwasher in restaurants to earn a little money somehow. Occasionally, he also got a job as a groomer and led from dogs. This work made him the most fun, because he was able to deal with you again increased with dogs. He was now often with many dogs at once on the road, he had so well under control that he did not need a leash. Cesar Millan understood the psychology of dogs and he raised it so much that they gave him no problems. People wondered about the wayward dog caretaker who managed without difficulty to work even with the most aggressive dogs. Cesar Millan soon performed the miracle, the most dangerous dogs that should be put to sleep already, to be able to rehabilitate and re-integrate into society. Over time, people began to trust Cesar Millan and gave him now more often orders to work with the dogs as a dog trainer.

Cesar Millan: "It's a long way to make people aware of what makes a dog really happy"

Cesar Millan gained by his passion, how he dealt with dogs, sometimes great notoriety. His successes with maladjusted dogs spread among the public like wildfire and more and more people wanted to use the services of the unusual Dog Whisperer to complete. Cesar Millan founded due to his great success soon own dog school and was now self-employed dog trainer. Then the media became aware of the "Dog Whisperer" Cesar Millan and got an offer to develop their own TV show about dogs. Cesar Millan was immediately impressed by this fact, and worked energetically to this new project. He also attended English courses, because the language was one of the most important requirements in order to realize this TV show can.

The first episode with Cesar Millan was on 13 September 2004 under the title "The Dog Whisperer" broadcasted on television. This special dog shipment Cesar Millan international breakthrough, his fascinating series with the dogs was soon broadcast in over 80 countries. In addition, Cesar Millan wrote books about his experiences with the dogs, which were all at incredible bestsellers around the world.

Although Cesar Millan came from a poor family, he always believed it, even being able to become a successful dog trainer. With its new and unconventional methods, that people need to be trained in dealing with their dogs, it was just right. After all, not the dogs themselves were to blame for their wrongdoing, it was always the people who brought the wrong dog. Cesar Millan changed the lives of many desperate people and helped by his special training, to improve the relationship between man and dog crucial. He became one of the most famous Dog Whisperer around the world, who made it from rags to riches.

Cesar Millan: "The fact that I'm an immigrant, spoke no English and came from poor backgrounds, has never occupied the first place in my thinking. The dream of a successful dog trainer always stood in the first place "