Mark Oliver Everett: "I mastered my problems through art" 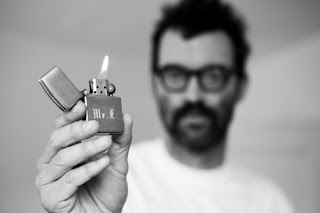 Mark Oliver Everett was born (USA) in Virginia on April 10, 1963. Already in his childhood he was interested in highly of Music and constantly listened to music on plates in the room of his older sister. At the age of six years he got a drum kit, with which he should practice the next few years enthusiastic. In addition to the drums, he taught himself to play on an acoustic guitar, even when he wrote his own songs and took pieces of music with an old tape recorder. But in his youth was Mark Oliver Everett problems, and this was just the beginning of another great misfortunes.

Mark Oliver Everett grew up in difficult family situations. Particularly to his father, who was a renowned physicist, he had a miserable relationship. He was an alcoholic and strong heavy smoker, and he cared not at all of the family. Mark Oliver Everett came into contact with drugs and alcohol, he had problems at school and came repeatedly into conflict with the law. Since he found no support in his family, he sought refuge in his music, which he again gave strength to survive these difficult times.

Over the next few years he took part in several bands, playing drums or worked as a guitarist. By the way he wrote songs and continuously recorded demo tapes. He constantly dragged any tapes around with you, but no record company interest in his music showed even the slightest.

At the age of 24, he moved to Los Angeles (California), to still be able to gain a foothold in the music industry. To earn his living, he took part in inferior jobs, in his spare time he wrote in his small apartment to another without pause songs. Through his determination, he managed eventually to get a record deal. He released his first solo album, trying to sustainably establish in the music scene. But since most of his second album was not very successful, his recording contract was not renewed. Now Mark Oliver Everett was back at the beginning of his career, with no prospects of a speedy recovery.

But he did not let it get out of this defeat and fought doggedly, he believed in his musical talent. Day and night he wrote songs and recorded songs. Mark Oliver Everett founded the band "Eels" and worked unceasingly on his next album. Shortly before publication of his album committed his sister, who had always been his biggest fan, but was for years addicted to drugs, suicide. Almost at the same time his mother fell ill from cancer. Although he took care of his mother, her illness was too heavy. She died after a long period of suffering, Mark Oliver Everett had now lost his mother and his sister in a very short time. In these darkest moments in his life he realized that he had only his music in life. He processed the tragedies in his family with the music and produced songs, which dealt mainly with sadness and pain.

Mark Oliver Everett: "I mastered my problems through art. With the music I could get through the shitty situations "

These gloomy songs he met exactly in the heart of man. The rock band "Eels" with Mark Oliver Everett has now always known, they played at festivals and organized several tours around the world. No matter where they went, the concert halls were full, everyone was thrilled by the songs of Mark Oliver Everett, who now could play all his musical abilities. The success run of Mark Oliver Everett could not interrupt even the next blow. In 2001 died his cousin, a last living relative of his who was a professional flight attendant. It was located exactly in the plane that kidnapped on 11 September 2001 by terrorists and in the Pentagon (Department of Defense USA) was drawn.

Mark Oliver Everett had to overcome a lot of misfortunes. Still, he never lost hope, fighting continues in his life. Through his love for music, he managed to overcome the many setbacks and to give people with his songs again optimism and confidence.

Mark Oliver Everett: "Only the music has kept me alive. It makes me proud when fans write that you have my music helped by crises "