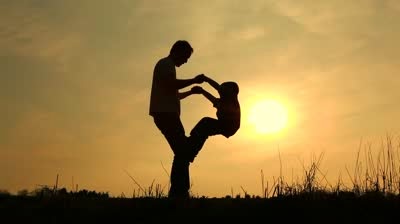 One day a man with his son who had just graduated from high school sat chatting in the yard, watching the atmosphere around them. Suddenly a crow perched on a tree branch. The man and pointed to the raven as he asked, "Son, what is that?"

The father nodded, but a few moments later he repeated the same question. The boy thought his father less heard his answer and replied with a little hard.

"That a crow daddy!"

The father was silent immediately. But not long after once again ask the same questions that make the child his lose patience and replied in a tone that is reluctant to answer questions father, "THAT IS A CROW.......!!!".

A few moments later the man once again opened his mouth only to be posed the same question. And this time the child actually lose patience and become angry.

The father then got up and into the house leaving his son. A moment later the father came back with something in his hand. He extended it to his son who was still angry and wonder. It turned out that the object is his an old diary.

"Why do not you read what I ever wrote in this diary" pleaded the man. The boy obeyed and read the following section.

"Today I was in the yard with my five years old son. Suddenly a crow perched on a tree. My son kept pointing towards the crow and asked, "Dad, what is it?".

No matter how, my children keep asking the same question, and every time I replied with the same answer. Up to 25 times my son question the same ask, and for the sake of love and affection, I kept replying to satisfy his curiosity. I hope that it becomes a valuable education for him. "

After reading the part of the child looked up at the face of the father who looked wistful. The man talked with slowly voice, "Today I just ask you the same question for five times, and you have lost your patience and became angry."

One lesson from this story of inspiration above;
"Patience is actually owned by a father is a must. Without wanting to be seen, a father just wanted to do with his best to his children "