True love lasts up to the end of life

"Love will last until the end of life, if it is true love" 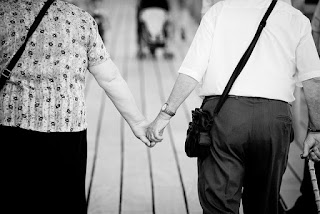 The 2nd World War declined in 1945 to an end, the Allies invaded already far into the German Reich. To the east, the Soviet troops were on their way to auszuholen the last blow to Berlin and Adolf Hilter. They came this past the small German town of Bärwalde, which was occupied by the Russians immediately. Many residents were sent to labor camps, among them was the 19-year-old Elvira Profe. In a forced transport it was transported to the northern Russia, where the delicate wife now had to perform at breaking work.

Elvira Profe: "Already during transport in cattle wagons dozens of people were killed. In Siberia received us cold and hunger, scarlet fever and malaria called for further sacrifice "

After nearly a year Elvira was already sick and emaciated in the local hospital. Because she was no longer usable for work, it was sent back. But when she returned to their home, they could hardly believe what had happened there in her absence. Bärwalde now called Mieszkowice and now belonged to Poland. Almost all their friends had fled or were expelled, many Polish families from the East were forced to settle here and now lived here. The only bright spot was their parents, who were still here. Her father was here used to operate a standard factory, which belonged to him before the crew of Russians still own. But not only the factory of the family were taken, and the house and all their possessions. Hardly anyone helped the marginalized Germans, except for a young and handsome Poland, named Fortunat Mackiewicz.

Elvira Profe: "There was little to eat. But worst of all, that we were treated like freewheeling prisoners, we had no rights "

One day Elvira knocked on the door of Fortunat Mackiewicz to beg for some bread and milk. As the 25-year-old Pole Elvira saw it, he immediately had pity on the emaciated young woman and gave her something to eat immediately. In the following days Elvira spent more and more time with the family of Fortunat, she helped to milk the cows and haul the hay. Fortunat and Elvira spent many hours together, and with time, a gentle love between them developed. Soon their love and affection to each other was so strong that she wanted to marry.

Elvira Profe: "At first we were friends. Friendship, great friendship, trust. And then - love "

But the communist bureaucrats were horrified by this relationship to a German mother and forbade them to marry. A short time later, the next serious setback for falling in love, because in 1947 suddenly had the last German people leave the city Mieszkowice. Within hours, Elvira had with her parents to pack up the few belongings and left the city. Elvira and Fortunat parted reluctantly from each other, at the end they exchanged more quickly from photographs. Then the family left for Germany, and Elvira and Fortunat should look for the last time for a very long time longing in his eyes.

Elvira Profe: "Of course I've cried. But there was no time for mourning. We had to survive yes "

Back in Germany, the family established a new company, but Elvira and Fortunat heard nothing more from each other. And so the time passed, and the Iron Curtain also contributed to the fact that the two lovers could not see each other again. Elvira thought much on Fortunat, in her heart, he was always with her, but times were hard and everyone had now alone go his way. Over the years, disappeared more and more confidence that they ever met again. But when in 1989 suddenly the wall to the east fell, sprouted again hope for, and Elvira took the opening of the border to search for their loved ones. After a few misunderstandings she finally felt on Fortunat, he worked in a workshop for agricultural machinery, but in a different area. They began to write in 1995, nearly 50 years after they had seen for the last time, they met at the old train station of Mieszkowice again. Elvira was now 70 years of age, Fortunat was 75 years old.

Elvira Profe: "I had his photograph for 50 years with me. We fell around his neck and it was as if those 50 years just vanish, as if they had never been 50 years "

In 2005, she finally made it still at that event, which had been denied them over the many years they were married, because her love had become much stronger to each other over the years. For their retirement they built a small house in the small town Mieszkowice where they had at the time and met such a happy time spent together.

The two over-80s enjoy every moment with each other and they are located in a matter more than sure, "Love will last until the end of life, if it is true love"