I am only an instrument in God's blessed hands

Joao de Deus, "I am only an instrument in God's blessed hands" 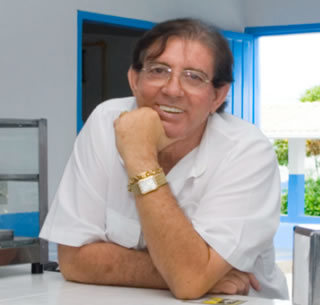 Joao de Deus was born on June 24, 1942 in Brazil and grew up in poverty. He already had to leave school early so he could support his family. Even as a child he felt, however, that he possessed special media and heal generic skills. Even though he had no medical training, he felt instinctively that this was his purpose in life to help other people with their complaints. Thus, Joao de Deus has developed into a spiritual healer to follow his life's work. The spirit healings experienced by its positive results much attention and soon visited him more and more sick people who asked for healing.

Joao de Deus managed to open for the sick, the profound healing the spiritual world and enabled by impressive cures. With great dedication he put all his healing mission of his personal ego and traveled throughout Brazil to treat people. With the growing number of its effective healing but also increased the number of his envious, so Joao de Deus was often appears unjustified because of the illegal practice of medical treatment. He was not only repeatedly jailed, but also persecuted and beaten. Joao de Deus but braved the scorn and derision and exhibited his mission on the attacks against his person. His only crime was that he treated sick people for free, and, moreover, with great success.

Since the constant traveling for Joao de Deus were very tedious over time, he settled in the small town of Abadiania, where he opened a spiritual healing center. One reason was that the environment was there, crystal rocks, which had a high positive energy. In Casa de Dom Inacio de Loyola, he treated now in the day hundreds of infirmity and suffering. There was even a room where crutches and wheelchairs were kept because they were no longer needed by the healed man. Although Joao de Deus had no real medical training, the queues grew longer before his healing center, but how this was possible without significant damage to the patient wreak?

Joao de Deus, "I'm not the cure, God allows to cure the Beings"

Joao de Deus communicated not only with spiritual beings, but he let her take control over his body. The spirit then took his hands and his voice in order to manifest the healing can. Joao de Deus had to give up his will and his personality completely, to fall into a trance-like state. These beings consisted of deceased persons who had been in her previous life physicians, surgeons, healers or theologians and the knowledge possessed in order to implement the supernatural healings among the people into action. Joao de Deus was ready to be the spirits assist only as a channel. Through word of mouth, these special healing powers spread far beyond the borders of Brazil. Of course, exact investigations were initiated, primarily because conventional medicine could not explain the incredible healing results.

Joao de Deus has been assessed by the best researchers and scientists and rigorously tested. Thousands doctors could assure themselves, as experienced here sick and healing as Joao de Deus treated his patients. Newspapers wrote articles, countless films and television reports were filmed, where was reported that spiritual healing. Joao de Deus was to investigate the most intensively studied healers in the world, partly because he himself encouraged all allopathic doctors to his work in detail. He was a major concern that medicine and spiritual healing could complement each other very well for the benefit of the people and that this knowledge has been spread around the world.

The over 50-year-long work of Joao de Deus was so valuable because he could treat many people successfully, which have already been given up by conventional medicine. He was the last hope for patients from all walks of life and diverse religions, whether rich or poor, prominent or unknown. His care was so unique that even the greatest critics came to him to take his help. Because even they had to admit soon that man was not just a body, but above all a spiritual being was.

Million people were out of Joao de Deus already healed because his spiritual healing which the commercial medicine which only cared about the material body, was far superior. He thus became the living proof that there was a spiritual world with far more powerful forces that could heal people.

Joao de Deus, "I am only an instrument in God's blessed hands"