Daphne Sheldrick - The Mother of the Elephants

Daphne Sheldrick: "Elephants have a sense of responsibility, take care of their boys and have an understanding of injustice and fun. They have an almost mysterious apprehension that transcends human interpretation" 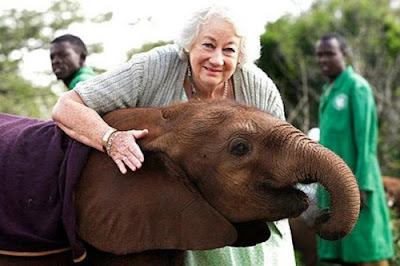 In Africa there are horrible scenes every year. Tens of thousands of elephants are cruelly slaughtered, just to get their ivory. The poaching flourishes, because the trade with the tusks has never been so profitable. Especially in Asia ivory is considered a luxury product and is bought as a statutory symbol and financial investment. The population of the elephants is therefore strongly sinking, with no real hope for improvement. A brave woman in Kenya (Africa) fights for the survival of the Pachyderms: Daphne Sheldrick.

Daphne Sheldrick was born on June 4, 1934, and grew up on a farm in Kenya with numerous game animals. Together with her husband, she later worked in the Tsavo-East National Park, the largest national park in Kenya. Together, they built up the park and took care of helpless animals. Especially orphaned elephant babies had done it to them and offered them a new home. For without their parents, who were mostly victims of brutal poachers, they had almost no survival. In no time they would starve or become prey of any predators.

Daphne Sheldrick: "Elephants harvest what they sow. If they are treated well, they reply with love. One is cruel to them, then with aggression. They react particularly sensitively to touch and can even feel the touch of a feather"

Since the elephant babies could not tolerate cow's milk as a substitute food, it was not possible to keep them alive for a long time. Daphne Sheldrick, however, did not let her get discouraged and researched until she had found a special milk mixture that the animals also adopted. Thus she succeeded in feeding even the smallest elephant back to vital food. After the death of her husband, Daphne moved Sheldrick directly into the National Park, where she founded a special elephant breeding station.

Daphne Sheldrick: "Young elephants are the first 3 years of their life dependent on milk and can not survive without it"

Daphne Sheldrick accompanies sad and traumatized elephant babies, who had to witness the shock of the loss of the family up close. Since elephants have a very distinctive sense of family and understanding of death, the mourning phase can last several months. During this time, they will be looked after by carers around the clock. Only with a lot of love and compassion the little elephants re-gain confidence and can then be slowly released again. Even elephants who have been raised for a long time come back again and again to greet the people who have helped them. Elephants never forget.

Daphne Sheldrick: "Elephants have a sense of responsibility, take care of their boys and have an understanding of injustice and fun. They have an almost mysterious apprehension that transcends human interpretation"

Today, the Elephant Swans House is the world's most successful rescue and recovery center for young elephants. Daphne Sheldrick is considered the "mother of elephants" and is internationally recognized as an absolute expert. Through her tireless commitment, she puts a worldwide exclamation mark against the poaching in the new entrance and created a new awareness for elephants in need. In 2006 she received a British Order of the British Empire from Queen Elizabeth II, the first time in Kenya since independence in 1963.

Daphne Sheldrick: "Corruption must stop, it is ubiquitous in Africa and worldwide ivory trade has to be banned. Elephants deserve to be lovingly treated "