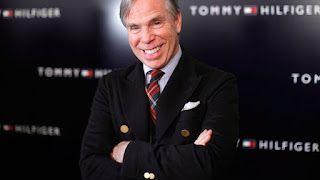 Thomas Jacob Hilfiger was born on March 24, 1951, grew up in the small town of Elmira (New York State, USA). The family lived in a modest background, his father was a watchmaker, his mother worked as a nurse. Much the family could not afford because Tommy was the second of nine children, all of which had to be supplied. To be able to buy books or clothes, Tommy took over again at different jobs, he mowed lawns, wore out newspapers or worked at a gas station. Tommy Hilfiger was very interested in clothes and fashion, but in the small town of the modern fashion scene was largely insignificant.

Tommy Hilfiger: "In Elmira there was only football, baseball and basketball. I thought that was dead boring "

One day drove Tommy Hilfiger during school holidays with a few friends to New York City, and this trip would change his life forever. In the 1960s, he plunged into the magical hippie movement and was excited about the wild life and colorful clothes this scene, which was very different from his secluded and quiet home. From now to go to Tommy Hilfiger decided his own way and do what he wanted to do. And so he returned full of enthusiasm to Elmira back to realize his plan to open her own fashion business, because in his opinion, his hometown was the fashion concerning absolutely backward.

His parents were not enthusiastic about this idea and urged her son to continue to attend school in order to later get a good professional can. But Tommy Hilfiger believed in his talent as a fashion designer and opened at the age of only 18 years, together with two friends and a starting capital of 150 dollars, his first fashion shop ("People's Place"). He bought for jeans and bell-bottoms (pants, the further from the knee during downward) that were at that time as a fashion icon of the hippie movement, they change according to his ideas, and then sold it in his new store. The business soon became a popular meeting place for young people from all over the city and they were all impressed by the idiosyncratic creations of Tommy Hilfiger. Stubbornly he settled in accordance with the hippie scene grow his hair and helped constantly flares, for this reason he was soon known throughout the city.

Tommy Hilfiger: "My parents would have liked me to go to college and a normal occupation overtake, but that did not interest me. In my father was no more enthusiastic about my long hair as "

The store went through several years with great success, however, Tommy Hilfiger was more active as a fashion designer as to take care of the business management. And when the buying habits of Americans changed by the emergence of large shopping centers, the fashion business was soon bankrupt. Despite this failure to Tommy Hilfiger could not be beaten and believed still to be able to have success in this industry. Although he had no money, he put everything on one card, packed his belongings and moved to New York City to work as a fashion designer. Tommy Hilfiger had to endure many sleepless nights, because it was his entire existence is at stake.

Tommy Hilfiger: "I just knew in my heart that I, if I go on, would eventually be successful again"

Tommy Hilfiger worked unwaveringly night and day, over and over again, he designed new creations in order to advance his career. In 1984, he was so convinced of his fashion that he founded his own fashion company "Tommy Hilfiger Corporation". Shortly thereafter, he brought his first fashion under his own name on the market. In addition, large campaigns were launched, including huge advertising posters were hung directly on the famous Times Square in New York. The then unknown Tommy Hilfiger turned immediately on a par with the greatest American designers such as Ralph Lauren and Calvin Klein. These were of course upset that an unknown fashion designers was so outrageous and simply compared with them, but success should give Tommy Hilfiger law. Within a short time his company grew, the advertising campaigns and his flair for unusual fashion were successful ingredients of an incredible success story.

In 1991, Tommy Hilfiger has already made over 100 million dollars in sales with its brand. In addition to clothing Tommy Hilfiger designed a wide range of accessories, such as shoes, bags and headwear. All over the world Hilfiger stores were opened and the company's revenues rose continually. Meanwhile, Tommy Hilfiger had risen to the most popular brands in the fashion world, in over 60 countries, there were already more than 1000 Hilfiger stores.

Tommy Hilfiger lacked actually the most important requirements to become a successful fashion designer. He came from a small town with no fashion sense, he had no money and his family could not help him. Although he never attended a design school in his life, he managed to become one of the most famous fashion designers in the world to ascend. His recipe for success was simple, he worked hard for his success and he always had the right feeling for the fashion world. He stood up against all people who wanted to dissuade him from his dream of becoming a fashion designer, and always went his own way. From this strong-minded attitude he developed on its own one of the most successful companies in the fashion industry.