Philip Morris developed for Marlboro, the fictional advertising character "Marlboro Man" ("Marlboro Man"). The Marlboro Man quickly established himself as a tough and manly cowboy who rode against the sunset with his horse and equipped with a cigarette did his duty. The performers Cowboys could be seen in countless TV commercials and posters, 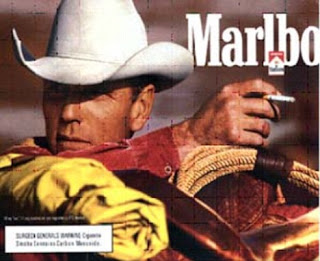 Wayne McLaren was born (USA) in Louisiana on 12 September 1940 and worked as a professional rodeo rider. As an actor, he earned extra money, he was for a variety of series and also for film productions (mostly Westerns) involved. Since he was very popular among the people, soon the advertising industry became aware of him. The big cigarette manufacturers Philip Morris eventually signed him to do publicity for his cigarette brand Marlboro. Wayne McLaren fit perfectly into the requirement profile of a completely new and unique advertising strategy of the giant tobacco producers.

Philip Morris developed for Marlboro, the fictional advertising character "Marlboro Man" ("Marlboro Man"). The Marlboro Man quickly established himself as a tough and manly cowboy who rode against the sunset with his horse and equipped with a cigarette did his duty. The performers Cowboys could be seen in countless TV commercials and posters, they gave the people a taste of freedom in the dreary everyday life. They envied the Marlboro man who casually with a cigarette in his mouth always turned all challenges. This emotional appeal of the brand came with the people very well and many attacked by this marketing strategy for increasing cigarette. Young people in particular were fascinated by the cowboy, as the figure represented an independent lifestyle, which had full control of the life, with the help of a Marlboro cigarette.

Through this campaign the Philip Morris Group won large market shares and sales of cigarette cases skyrocketed. Wayne McLaren became famous for his portrayal of cowboy world, because everyone wanted to be as cool as he and the Marlboro Man. Stars and actors got themselves unabashedly her cigarette in her films produced as well as politicians in the talk shows. Wayne McLaren smoked matching its illustrated Werbefigur in the private sector more than a pack a day. But at the age of 49 years, the perfect world should be suddenly for the heavy smoker gone forever when the doctors diagnosed lung cancer from him. One immediately initiated chemotherapy and the removal of a lung could not stop the cancer. The malignant tumor sprinkled and was already clear to the bloodstream into the brain. Wayne McLaren realized with a shock that he had lost his life by the cigarettes forever.

In response to his illness Wayne McLaren launched immediately an extensive anti-smoking campaign. He wanted to warn people about the dangers of cigarettes, even though it was already too late for him. In a newly designed commercial he was depicted as a handsome cowboy with cigarette on his horse, the next moment, however, as a terminally ill man in a hospital. At the shareholders' meeting of Philip Morris, he called loudly on to limit cigarette advertising, but the claim was in the company only on deaf ears. In public lectures he tried to warn about the consequences of smoking with his last strength, children and adolescents. Until his last breath Wayne McLaren fought against the harmful cigarettes, after two years of suffering but time was his nagging commitment to an end. He died on 22 July 1992 at the age of 51 years already greatly weakened as a consequence of lung cancer.

The hypocritical world of smokers now began slowly but surely crumble. By shocking anti-smoking campaign of the former Marlboro Man Marlboro lost advertising much of its appeal. But not only the death of Wayne McLaren roused the people, even by deaths of several prominent actors like Humphrey Bogart or Steve McQueen, the image of the smoker began to change. While the tobacco industry, the health hazards of smoking denied long, soon occupied numerous scientific studies of the harmful effects of the toxins on the human body.

The Marlboro Man was a one of the most sophisticated marketing strategies in the history of successful advertising, but he drove the same time many people to their deaths. Only shock diagnoses such as lung or stomach cancer brought many smokers to think about, but it was in many cases too late. Million people died as a result of cigarette smoking, just as it was the Marlboro Man Wayne McLaren issued. But in a last rescue mission, he managed at least, to convince the public of the harmful effects of cigarettes.

To date, the handle for the cigarette as a relaxation and for social communication is used, especially for many young people it triggers a cozy feeling of belonging from. The fear of a possible disease is so long hidden, until they actually arrive at some point. Then it will be too late, however, for many smokers.

Wayne McLaren: "My addiction has avenged himself. I end my life under the oxygen tent. I tell you, smoking is not worth it "