Philo Farnsworth died on March 11, 1971. A small roll of honor, where there was his former laboratory, still reminds his great achievements. It took many years until you gave him the necessary recognition. 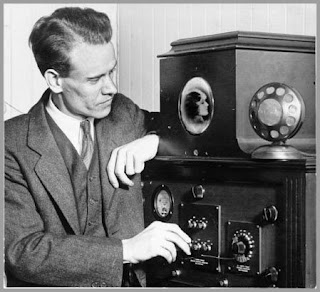 Philo Farnsworth was born on 19 August 1906 in Indiana Springs (USA). He grew up in squalid conditions in a simple log cabin, there was no electricity and no running water. After a few years the family moved to a small farm in Rigby (Idaho), where his father was working as a farmer. Life in the new house was indeed further very modest, but it was for the first time electricity. Moreover, Philo Farnsworth discovered in the attic magazines about electrical engineering, which fascinated him immediately. It was a whole new world that Philo Farnsworth now explored step by step.

Since the nearest school was several kilometers away, Philo Farnsworth had to travel the route with a horse. Especially in physics and chemistry, he was an inquisitive student and allowed after a short time visit courses for older students. At the age of 12 years was found for the first time its exceptional technical talent. Since the mother had to move laboriously by hand a mechanical washer, Philo Farnsworth joined unceremoniously to an old electric motor to the machine. This makes it extremely simplified washing with a now new electrically powered washing machine. At 14, Philo Farnsworth was just with the plow of the potato field busy when he had an idea of ​​the electronic image transmission.

Just as he pulled the ruts in succession in the field, perhaps even an image line by line was transmitted electronically. Philo Farnsworth managed by his technical talent at a university where he was able to deepen his knowledge in electrical engineering even further. After a short time he had to his studies but quit again because he had to take care of the family after his father's death. The idea of ​​the electronic image transmission but did not let go of him and the 19-year-old Philo Farnsworth still managed to find sponsors for his vision of the TV. He moved into a laboratory to California and to concentrate from now on fully to his research.

Philo Farnsworth used their own ways to achieve its goals. Although he had no appropriate training, but he was free of any prejudices. He tried and explored new avenues which has never been a scientist passed away before him. Philo Farnsworth did not want to bother with trivialities, but always focused on his dream of one day to construct a TV. Since its first completed camera exploded, he had again completely start over again with new donors. On 07 September 1927 he finally succeeded the great sensation, as if he could transfer an image to a receiver in another room. He thus created the first television image of the world.

There now followed a years of patent litigation, which was led by the powerful RCA with a lot of money and lawyers. During this court dispute Philo Farnsworth could make and sell what it made it hard not to create televisions. After a long struggle Philo Farnsworth won Although the patent dispute, but unfortunately broke at this time of the 2nd World War, and the television was reserved mostly military uses in the war. After the war ended, the patents of Philo Farnsworth ran out but already, so he could no longer use. The large companies RCA sold now the TV in a big way and also made in-house advertising, to have actually invented the television. Philo Farnsworth deserved nothing more to it and eventually withdrew from the depressed Fernsehforschung back.

Philo Farnsworth fell into depression and was addicted to alcohol, also burned his laboratory with his entire life content in a fire. He worked until his death with other projects, but to his greatest discovery of how the TV, it should no longer approach.

Philo Farnsworth died on March 11, 1971. A small roll of honor, where there was his former laboratory, still reminds his great achievements. It took many years until you gave him the necessary recognition. In 1999 was included among the 100 most important people of the century Philo Farnsworth from Time magazine.