I have cancer, but the cancer does not have me 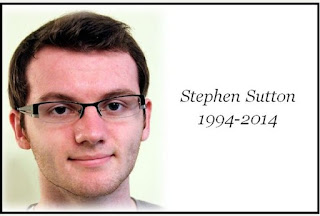 Stephen Sutton was born on 16 December 1994 in England and was a very active child. He participated in sports and athletics events and was an avid soccer player. His academic performance was very good, which is why he wanted to study medicine later to become a doctor. At the age of 15 years of his life plan was completely overthrown, as she was diagnosed cancer in him. After a short time the doctors told him the next shock news because his illness was incurable and could Stephen Sutton no longer operate. There was hardly a worse message for a teenager who had his whole life ahead of her.

Stephen Sutton was determined not to be defeated by his fatal illness. Despite an initially severe radiation and chemotherapy, he began to create what he wanted to do all a list of 46 things. Stephen Sutton went skydiving, embraced an animal which was greater than he (elephant) and could be a tattoo. At a heavy metal concert, he let himself be carried on a boat through the raging crowd and looked around the big Wembley Stadium a football match on. However, the most important item on the list by Stephen Sutton was a fundraiser. He wanted to collect as much money as possible for the Children's Cancer Aid and established it as a separate donations on the internet.

Stephen Sutton: "I have cancer, but the cancer does not have me"

Stephen Sutton organized charity events to raise money for this cancer foundation. Even with a weak physical condition he did most tasks themselves and made this action far beyond the borders of England away known. His courageous fundraiser soon spread like wildfire and he managed to raise more and more donors for it. Although he knew he could die at any moment, he took advantage of every free moment to do good for people. Even when he was doing worse and worse.

On May 14, 2014 was the self-sacrificing struggle of Stephen Sutton gone, he died at the age of only 19 years. He did not make it to do all things on his list, but he had not bitter a positive attitude towards life and until his last breath. In his darkest hours he devoted himself selflessly of his cancer foundation and was its immense vitality model for many people. He gained several million euros for children with cancer through his passionate fundraiser alone.

It will be remembered for a long time to the extraordinary courage of Stephen Sutton and how he fulfilled his life list item by item. Why is it always takes a tragic event to meet our own list in life? This was the main message of Stephen Sutton, who was able to inspire many people to a more positive outlook on life, even after his death.

Stephen Sutton: "That's it from me. You can not give me more time. But I can try to give you a part of my motivation. So you goes out there and something changed. And your life enjoys. Life was good. Very good. I love you all "