Team Hoyt..! There are always opportunities 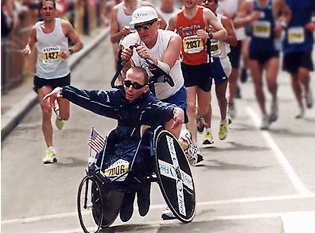 Rick Hoyt was born on 10 January 1962 dramatic conditions the light of day. At birth, the umbilical cord wrapped around his neck, which is why his brain was not adequately supplied with oxygen. The consequences were severe. The doctors predicted a cerebral palsy and he would never be able to cognition (perception, emotion). The whole life would vegetate the boy in a wheelchair in front of him, without any communication with the environment. A normal development was impossible in the opinion of the doctors and they gave the parents (Dick and Judy Hoyt) the Council to give the boy in a nursing home. For parents this option, however, never came into question.

Dick Hoyt: "Everyone should have the opportunity to participate in everyday life"

The severely disabled Rick Hoyt was so well it went in all family activities miteingebunden. Again and again the Hoyts found a way to spend their free time together - swimming, cross-country skiing or hiking. And even up on a mountain was marching - and on the shoulders of the father was Rick Hoyt. For the family Rick was intelligent, but lack of ability to speak has been equated with a lack of intelligence, why was denied on education for the time being he also participating. But at the age of 12 years succeeded Rick, who began to laugh heartily at a joke to prove the scientists Tufts University in Massachusetts his intelligence. Soon after, a communications machine was developed, with which Rick was able to communicate with the movement of the head or the knee. But what would be his first words? In the first experiment were all very excited, as long as the family had been unable to agree with Rick. And the first written words were unusual: "Go Bruins!", Based on the Boston Hockey Team. The Erstaunung was great - Rick was actually a huge sports fan, although he himself was unable to use his legs and his arms.

Shortly thereafter, Rick attended school regularly already. If a basketball game has been called to 8 km charity run in favor of a paraplegic student. Rick was immediately fascinated by it and wanted to help. And so he asked his father actually to push him in this race with the wheelchair. Many people thought at an early task of Hoyts, but supported by the cheers of astonished spectators, they reached the goal. Rick typed after this experience the following message for his father in the computer: "Dad, when I run, I feel not at all handicapped me." This was the starting point of the incredible story of the "Team Hoyt".

Out of love for his son intensified father Dick Hoyt henceforth run training because it needed strength and stamina to get through the physical ailments. He grabbed sacks of cement into the wheelchair and so ran kilometer after kilometer. Soon the Hoyts ran her first marathon, and many media have already reported on the Team Hoyt. Once the father was asked if he would run without his son. The answer followed promptly: "Why should I? He is the one who drives me "And it should not come further efforts on the father -. Because they received an invitation to a triathlon near Boston. 1.6 km swimming, 64 kilometers of cycling and 16 kilometers of running were indeed not for beginners, but the Hoyts wanted to try it anyway. Dick trained from now on up to 5 hours a day in order to get fit. With difficulty were his first swimming attempts, because since the age of six he was no longer swimming. But for his son he took all efforts and hardships in purchasing.

Rick Hoyt: "Dad is a role model for me. His father had once put something in his head, he let himself which no longer dissuaded. "

By means of a chest strap and a rubber boat he pulled his son while swimming along behind him. Come out of the water the father picked up his son in a wheelchair, who was attached to the wheel. He had to be careful so that the trailer with his son not upset, but it worked. The course was the easy part, and so the triathlon was terminated after sensationally good 4 hours. Such a thing had never happened before, and yet it should still be an increase for the Hoyts. For now followed the ultimate goal and the highlight for almost any athlete, the Ironman in Hawaii. But she promptly received a rejection because it was too dangerous to swim in the open sea, according to the organizers. Dick and Rick Hoyt but did not give up, and finally with the help of a senator you got a starting place at the toughest race in the world. The big disappointment was followed but shortly afterwards. Dick Hoyt was due to incompatible drinks severe stomach cramps, and they already had to quit during the swim the race. It was the first race, which the Hoyts were not completed. Father Dick was heavily buckled and thought he had all disappointed. The organizers, however, were more than delighted with them, saying, for the next year spontaneously from a new invitation for the Hoyts. A new opportunity for the Hoyts to cope with the incredible 3.8 km swimming, 180 km cycling and 42 km running track.

And next year it was actually better. The swim course was mastered brilliantly, 8 hours later they had also managed the bike course. As the Hoyts be set out on the marathon course, many athletes Been goal. But the strenuous swim and the heat of the afternoon had cost a lot of strength and Dick Hoyt had to fight hard. He felt the heavy legs and repeatedly emerging fatigue. But the dreams and wishes his son Rick drove him again and again ahead, more and more on the way to the goal. It was shortly after 21 clock in the evening, the Team Hoyt managed something that did not make many ordinary athletes, they actually crossed the finish line. An incredible feeling of happiness through her, and especially Rick've never been happier in his life.

Dick Hoyt and his son Rick have demonstrated what can be achieved with perseverance and will. Had the Hoyts then listened to the doctors, her son would still languish in any nursing home. But they have prevailed against the many prejudices in everyday life and in sports. The father was out of love for his son to a well trained athlete and so allowed his son incredible experiences and moments of happiness. Rick Hoyt made his college degree at Boston University and now works there. They inspire today thousands of people with their courage and their motto "Yes, you can" and gathered additional several million dollars in donations to charity. When asked what would make Rick if he would not be sitting in a wheelchair, he replied: "The first thing I would ask my father to sit in a wheelchair, so I could push him a little way."

For those people who sink into self-pity and see no meaning in life, there are always opportunities, even if they seem difficult at first.