Miles Scott - How Batkid captured the hearts of people

At the end of the day, Miles Scott met even with the mayor of San Francisco. Cheered by thousands of enthusiastic spectators and televised live was Batkid in gratitude presented a symbolic key to the city. The five-year-old was so overwhelmed by the ceremony that he could only stretch his fist at the sky with excitement. The parents of the boy, who stood beside him, were moved to tears. 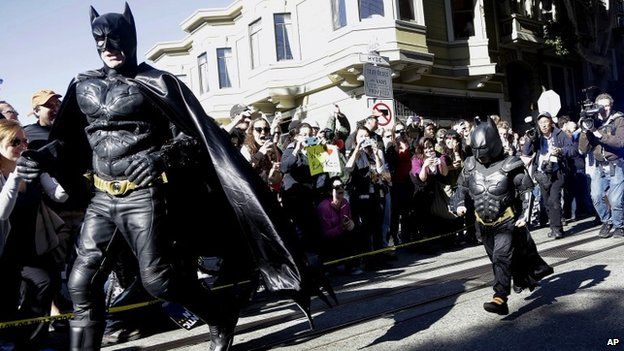 When Miles Scott was 18 months old, leukemia was found with him. The little boy Miles Scott had to go through hard times, and also for the parents, the long hospital stays were an enormous strain. Miles Scott had, despite his illness, a dearest wish in his life, because he once wanted to be a real hero. He dreamed of to go with his big idol Batman (comic book hero) hunting criminals and put the criminals the craft. From this great desire one day the Make-A-Wish Foundation which had the gratuitous fulfillment heart's desires of seriously ill children the goal. About a month before this project were a few volunteers wanted and first preparations were made. When the parents made their way to San Francisco (CA) with his five-year leukemia son, he should get a big surprise.

When they arrived, Miles Scott was presented a Batman costume, and this in person from the police chief of San Francisco. A black Lamborghini, which was specially fitted with yellow stickers, stood ready already than Batmobile. The little boy's heart was beating like crazy when he suddenly his idol Batman (disguised Actor) saw. He could now actually rise with his model in the car and go with him on a manhunt. When Batman and Batkid set off, he was accompanied by policemen on motorcycles. What he was not knew had noticed many people on the internet of this extraordinary action.

More than 10,000 onlookers gathered at the various locations to cheer Scott Miles. Batkid had to rescue a woman who was of course tied in appearance only on the tracks of the cable car in San Francisco, and he put a fictional thief the craft, which was about to rob a bank. Thousands of spectators clapped loudly applauded and cheered the boys on happy when he mastered his tasks with flying colors. Roads were blocked and helicopters circled over the city, as Batkid set off on the chase to the villain. Penguin successfully recapture. Five hours was allowed to Miles Scott romp throughout San Francisco, hundreds of volunteers organized him an unforgettable experience. 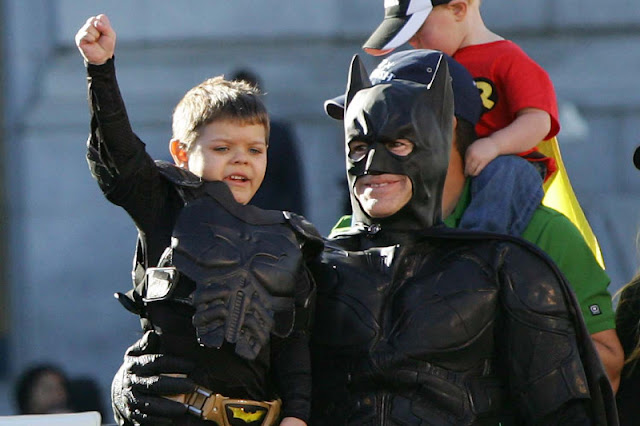 At the end of the day, Miles Scott met even with the mayor of San Francisco. Cheered by thousands of enthusiastic spectators and televised live was Batkid in gratitude presented a symbolic key to the city. The five-year-old was so overwhelmed by the ceremony that he could only stretch his fist at the sky with excitement. The parents of the boy, who stood beside him, were moved to tears.

Local newspapers celebrated the little hero with headlines like. Batkid saves the city and even the prosecution of San Francisco issued a press release with charges against the enemies Batkid out. Miles Scott also received a video message from US President Barack Obama and also in the social networks of the boy was the absolute star. The day of Batkid was shown on the Internet in more than 100 countries and watched by millions compassionate people.

This particular action has gone down in history as the day when the whole city was a little boy transmit their positive energy. The five-year Miles Scott made it in later follow to overcome his cancer. In his heart the many beaming people are so deeply rooted that it is this exceptional day Never forget today. He also wanted as Batkid in many adventures.