Katherine Johnson: "I counted the plates, knives and forks that I washed. I just counted everything you could count. Even the stars in the sky I tried to count". 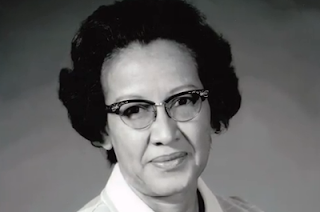 Katherine Johnson was born on 26 August 1918 in a small town in West Virginia (USA). Already at a young age she showed a high mathematical talent and was a very talented student. The parents allowed her a good education, so she went to the Highschool and started to study at the college, where she was mainly interested in astronomy. This school education was not self-evident to African-Americans at that time, but Katherine Johnson always found the right sponsors.


Katherine Johnson: "I counted the plates, knives and forks that I washed. I just counted everything you could count. Even the stars in the sky I tried to count".

As a black woman, Katherine Johnson had a hard time finding a job suitable for her education. She initially worked as a teacher and changed to the research of the American aviation industry at the age of 35 years. Here clever minds were needed to carry out important and time-consuming calculations. A woman's hearner worked feverishly to calculate flight paths, to control measured data, or to evaluate the flight recorder. While the men gave the fame to the public and took the big and important tasks, this was based on the female "computer women". Although they often only worked with pencil, paper and primitive computing machines.

Like the other black mathematicians, Katherine Johnson had to use a separate office. Because of the practiced separation of races in the USA, they could not use the same toilet or the same tables in the canteen as their white counterparts. The women were, however, able to be lent out by other departments at any time for arithmetic work to help with various projects. Thus, Katherine Johnson came as an aid to the flight research department, which was only occupied by men. Here, she was supposed to carry out computational work again and to support her male colleagues. But Katherine Johnson refused to act as an assistant in the background.

Katherine Johnson: "My colleagues did what they were told they were not asking questions. I hooked, wanted to know more".

Katherine Johnson asked deep-headed questions, wanted to understand connections, and had her own thoughts on the tasks she had set. She also attended meetings that had previously been reserved for men only. Annoyed, their male colleagues had to give in because there was really no law against this being forbidden for women. But Katherine Johnson did an excellent job and soon became indispensable through her analytical thinking. She then managed to become the only woman to be accepted into another department.

During this time, space travel took an increasingly important place in flight research. Katherine Johnson and her colleagues had to improvise and bring in their computational skills, since there were no real specialist books. When the scientific papers were finished, the name of a woman stood on a report for the first time, despite some resistance from direct superiors. Katherine Johnson, through her basic research, enabled the astronaut Alan Shepard to complete the first manned flight of an American in space (1961).

Meanwhile, however, more and more electronic devices took over the rendering work, which was however very error-prone. Thus Katherine Johnson was personally asked by the well-known astronaut John Glenn to check the numbers of the computer over and over again. It was only when Katherine Johnson controlled the calculations and given the green light that the astronaut went into the air and was the first American to orbit the Earth three times. Later, Katherine Johnson played a major role in the Apollo program and contributed decisively to the first moon landing. When Apollo 13 had to return to Earth on the basis of an accident, Katherine Johnson made the decisive calculations for the return journey. Three crew members were rescued by their improvisational period.

Katherine Johnson often used her intuition during her work because many things in the universe were still untested. It played a decisive role in the conquest of space, and all the astronauts trusted their insensibility. In the past, men always played the most important roles in the world conquest. But in fact, it was the merit of clever "computer women" like Katherine Johnson, who carried out the relevant calculations for space flights.

Katherine Johnson courageously walked her way and confided in her talent. She was a courageous champion for all women and broke the boundaries of race and sex. She received numerous awards for her achievements as a pioneer in space travel and was honored with the highest civilian award in the US by the then US President Barack Obama in 2015. (Presidential Medal of Freedom).

Katherine Johnson: "There was not a day when I did not like to go to the job"