Christin Thomsen: "Beauty has nothing to do with the weight. Just because I am fat, I am not ugly " 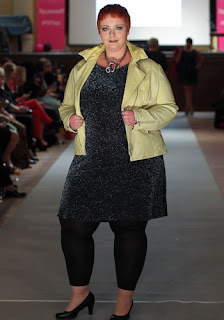 Christin Thomsen had both her career, she worked as a project assistant at a large company and worked as a medical writing services in use. For years, she admired the models on television, as people moved with her perfect figure and her sexy appearance in its spell. Christin Thomsen also dreamed of having once worked as a model in order perhaps to eventually run on the most famous catwalks of the world. But they had one major drawback, because she was overweight and would lean against the top models in the world do not have the spark of a chance. One day wanted Christin Thomsen but put everything on one card and took her courage in order to become a model at a fashion house.

Christin Thomsen: "attractiveness comes from within"

Much to her surprise, she was actually hired as a plus-size model. Christin Thomsen was able to score through their naturalness and great charisma. So she did not just very successful their first photo shoot, but soon their first fashion show. By entering into this sector followed for Christin Thomson quickly further contracts for large fashion companies and also for advertising campaigns she was engaged. Through their carefree performances she gave in the fashion industry in a gap in the market, because not only spindly women could become a model to be successful.

Since the majority of women could not identify with the exceptionally slim models, more and more curvy models were sought. Because of the high demand for large sizes also followed a rethinking of the designer to match the clothes sizes accordingly. Christin Thomsen felt very comfortable in her body and she presented it in all its contracts. She was the exact opposite of the many hungry and thin models without aura. So Christin Thomsen attained by their uniqueness international recognition and received modeling jobs in London or in Paris, which she was able to fulfill her dream.

Christin Thomsen: "Fashion is not a matter of standard size, but one of the inner attitude"

Christin Thomsen was one of the few models in its size, which asserted itself in this highly competitive industry. She stood thus single-handedly against the bizarre beauty ideal of society, always set only to thin and emaciated women. It was thus a model for many obese women that it was okay to have more curves. Decisive was the fact to feel in his own body well and to feel no more than bad, just because they could not meet the general standards.

Christin Thomsen: "Beauty has nothing to do with the weight. Just because I am fat, I am not ugly "