Elvis Presley: "I enjoy the business. I like what I'm doing " 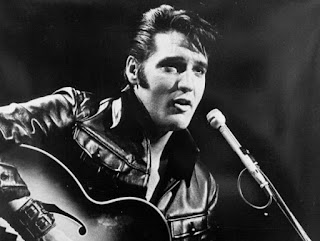 Elvis Aaron Presley was born on January 08 1935 in the small town of Tupelo (Mississippi, USA) and grew up in poverty. In the aftermath of the Great Depression, many people were unemployed and had to struggle to survive. The parents of Elvis Presley also worked very hard in order not to have to go hungry or becoming homeless. On the edge of subsistence, they managed at least to get a little house and always to finance her son, unlike many other children's shoes.

Since there was no money for expensive leisure activities, the family of Presley often sang gospel with friends or were heard in big groups Radio, since few people at that time had such a receiver. Despite strict segregation laws to Elvis Presley held often in areas, where many black people lived, because he was fascinated by the blues, which was played here constantly. In addition, he also visited African-American church services because he was able to sing with enthusiasm in Gospel music.

In the hope of economically better times the family Presley moved to Memphis (Tennessee). In this metropolis of music, Elvis Presley felt very well and he was passionately taken from a wide variety of music genres like country music or the upcoming Rock `n` Roll. He now began as a teenager to change externally, he wore long hair with sideburns and dressed conspicuously in the style of African Americans. His musical talent showed Elvis Presley for the first time at a competition at the school where he could occupy the first place with his performance. He was now clear that he wanted to become musicians and singers necessarily.

After high school, he had to take various odd jobs to earn a living can. He worked for a short time in a repair shop or worked as a lorry driver. In his spare time he appeared at dances or sang at parties. One day, Elvis Presley appeared at the recently founded the recording studio "Sun Records" in Memphis, where you could start its own record for a few dollars. The studio owner was from the shy but very talented singer immediately impressed and began recording a number of songs with Elvis Presley. The blending of Afro-American sounds with white country music was so unique that Elvis Presley got his first record deal there. And so Elvis Presley was at the age of 19 years with a small band first live concerts and they played regularly in various clubs. The fan base grew constantly, which also had to do with the extraordinary stage performance of Elvis Presley. Because by its very unusual at that time hip and leg movements he made it quickly to inspire the masses.

Elvis Presley: "I enjoy the business. I like what I'm doing "

Elvis Presley conquered not only in storm the music charts, but was also very successful as a film actor in Hollywood worked. The euphoria was also during a prolonged military service, which Elvis Presley led among others to Germany, unbroken. With countless recordings, Elvis Presley sang in the hearts of people and fans from around the world traveled to hear him sing live during his performances in Las Vegas. Elvis Presley broke incidentally constantly setting new records. The first concert, which was broadcast by a musician at all via satellite, was an appearance by Elvis Presley in Honolulu ("Aloha from Hawaii"). Over one billion people from over 40 countries tracked this impressive premiere, bringing more people at this concert in front of the TV sat as the first moon landing.

Despite successful career it was for Elvis Presley mentally and physically but downhill. He suffered since his birth already to a genetic heart defect, which his mother had died early. In addition, he had to cope with various ailments, such as chronic bowel disease or persistent sleep problems. His figure was greatly inflated by the various diseases and he took a lot of pills to be. At the age of 42 years his ailing body made no longer with. Elvis Presley died on August 16, 1977 in his estate at Graceland (Memphis), where he was buried. Public sympathy was so great that thousands people encouraging attention to his place of residence to take leave and the radio station all day continuously played Elvis songs.

Elvis Presley knew, as no other singer to convey the musical sense of African American population of white society. Through his voice, his charisma and his extraordinary stage show he rose within the shortest time on the "King of Rock` n` Roll "and popular entertainers in the world. He made it by reducing large barriers because of racial segregation and to give all people a better way of life.

Elvis Presley was always very humble and friendly in spite of great celebrity. Contrary to many other stars, he never appeared on talk shows and gave interviews rarely. He shunned awards and you never saw him at celebrity parties. Elvis Presley made by his amiable character and his soulful music make the world a better place. This was also the real reason why he became one crowd pleaser and a true legend.

Elvis Presley: "I grew up believing in this dream. Now I have seen him. More a person may not want "