Susan Boyle: "There is nothing worse than people who use their power to humiliate others " 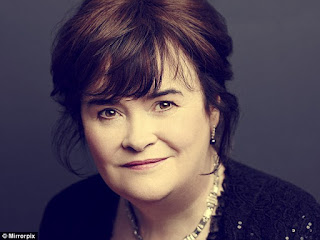 Susan Boyle was born on 01 April 1961 at the small town of Blackburn (Scotland) and grew up in modest circumstances. She spent a difficult childhood because she had great learning difficulties at school and was therefore constantly teased by the other students. Due to their conception difficulties she was even beaten by the teachers and simply ignored in the classroom. Susan Boyle could do nothing for her little impairment at birth she had to get some air and had for that reason a slight brain injury suffered. These years of humiliation they survived only by their great love for music, because Susan Boyle was passionate singer.

Susan Boyle: "I realize things just slower than other people. There is nothing worse than people who use their power to humiliate others "

Susan Boyle received voice lessons and sang in the church choir for years and in various choral societies. Here they felt safe and was able to pursue their great enthusiasm, because she had a great voice. Some talent competitions they tried to make the breakthrough as a solo artist, but as they did not have the look and dimensions of a supermodel, you never noticed it. When she had to even worry about the care sick mother later, she put her singing career a complete. Susan Boyle had repeatedly smaller jobs, including as a kitchen, but mostly she was unemployed. When the mother died, Susan Boyle fell into a deep depression, she now lived alone with her cat and had no real sense more in their lives. To get out of the miserable life maybe to even break out, she grabbed one of their last chances. At the age of 48 years already, she applied for the talent show "Britain's Got Talent". Although her dissuaded all friends of this project due to the potential embarrassment, managed Susan Boyle, hide these negative comments and to listen to her heart.

On April 11, 2009, she entered with an old Sunday dress and an idiosyncratic Lockenwicklerfrisur the stage and told the jury that she wanted to become a professional singer. The audience started to laugh and the members of the jury twisted in disbelief eyes. But then the unassuming Susan Boyle began her powerful voice to sing, "I Dreamed a Dream" from the musical "Les Misérables". When she sang the last notes, many spectators had already tears in my eyes. The judges could not believe it and jumped on clapping with enthusiasm, because Susan Boyle had a fantastic voice and was despite her age and her looks a real prodigy. In this show she attended later though only the second place, but the secret star of the whole show was Susan Boyle.

An outsider, the world had already been written off, fought against all prejudices to be successful. Against all the laws of origin, beauty and age Susan Boyle was brave enough to go in the spotlight and to face a large and critical audience. It showed people that it always pays to believe in their dreams, no matter what other people think of one.

Susan Boyle managed by the classic rags to riches. The international press went with reports on the unassuming woman who had nothing to show, to stand up to their talent and their extraordinary courage, to their passion. They sold millions of music sheets and rose from a small woman on an absolute superstar. In addition, she wrote a book about her life and her fairytale story can think better not film director would have been filmed.

Susan Boyle: "The singing, the people who have done made me silenced. I have found a new identity, I became another woman "