Michael Hirte: "I wanted to arouse no pity." 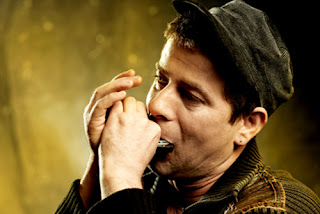 Michael Hirte was, in the east of Germany, born on 10 October 1964 in the small town of Spremberg. As a young boy he got from his aunt a harmonica given that he should always have with you from now on. Day and night he practiced it, although he could not read music and never received a lesson. He was very talented at a young age, he played children's songs at family celebrations and was in time by his incredible sense of this musical instrument always better.

Michael Hirte later graduated from many different professional training, he was engaged as concrete workers, as a soldier, as a fitter and in coal mining. But truck drivers was his favorite activity, and the profession he practiced with passion from. His life should but out of control when he had a bad accident with his truck in 1991. Michael Hirte was doing very badly injured and was two months in a coma. When he awoke, his past life, as he knew the half.

Michael Hirte: "I looked down at my legs and saw not my right leg again, it looked like fresh from the butcher with red scars and deep furrows"

He was blind in one eye by the accident and by a complicated leg fracture had him be inserted in the leg plates. In the medical rehabilitation Michael Hirte had to learn to walk normally again and to train its total flaccid muscles. Through his injuries, he lost his HGV license and therefore his job. As a result, he was trying to get another job, but by recurring pain in his leg he had no chance of success here. In addition, it began in this difficult time to kriseln in his marriage and by the great frustration it came increasingly to quarrel with his wife until they separated. Michael Hirte now lived only on welfare and had lost everything, his wife, his job and his health. From now on, he was alone in his world, but at least he still had his harmonica.

To bolster its finances and to escape the loneliness, Michael Hirte took to the streets and began to play with his beloved harmonica, because this was all that was left to him. In the pedestrian streets, he had not only stand up to bad weather, but it was just pretty quiet to be heard against other street musicians, because with his harmonica. Life of Michael Hirte was far from perfect, but he fought on and decided to make the most of his hopeless situation. So he made the courageous decision to apply for the German casting show "Got Talent" to, at the age of 44 years already.

As the jury members and the audience Michael Hirte saw for the first time, they immediately stamped him from a loser. But he believed in himself and dazzled the skeptical glances as best I could. But after his appearance he had all spectators behind him because he was playing with so much emotion and passion on his harmonica, that it touched many viewers to tears. And so Michael Hirte struggled with his harmonica continues round after round and was crowned in 2008, actually a sensational winner of this famous show. Shortly thereafter, he released his first album, which immediately became the absolute bestseller in the music world. This was followed by endorsement deals, a tour and made numerous appearances in various music programs on television. And always of course was his harmonica.

Michael Hirte managed by unemployed busker's London and has received numerous awards for its success. He did not let it get out of the many tragedies in his life and was always trying to make the best of his life. This was also his simple secret to success because he never lost faith in yourself, no matter how bad the times were.

Michael Hirte: "I wanted to arouse no pity. My point was to show how beautiful sounds harmonica and that you do not have to languish at home as an unemployed "