James Cameron: "You have to make yourself your dreams come true" 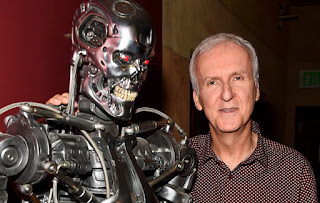 James Cameron was born on 16 August 1954 in Kapuskasing, a small town in Canada. He grew up in a normal family, his father was an electrical engineer and his mother was a painter. When he the science fiction film "2001: A Space Odyssey" at the age of 15 years for the first time saw it, he was so impressed with the special effects that he also wanted to go into the film industry. James Cameron read by now all about movies, special effects and generally everything about the history of film, what he could get his hands on. However, he was frustrated by the fact that he was far away from Hollywood, the world-renowned center of the American film industry.

However, this condition was to change in 1971 when his father a job in Orange County, California (USA) assumed. James Cameron was excited about it, because now he was near Hollywood and could now enter raring to go in the film industry. However, his euphoria was quickly slowed down, because his family could not afford his education at a film school. For this reason, he began to study physics in college. But he soon realized that his skills were limited in mathematics, and changed after a short period of English literature.

After college, he began working as a machinist and as a truck driver to work to earn a living. However, this was far from his mind, even to work in the film business, as it had been for years his dream. Only in 1977, when he saw (Star Wars) for the first time the newly released film "Star Wars", his passion for the film has been rekindled. Full obsession he brought now own the necessary knowledge about filmmaking and screenwriting at. In addition, he also learned how to deal properly with film equipment. James Cameron put everything on one card, he quit his job as a truck driver to deal from now on only to the filmmaking.

He produced his first short film in 1979, where he was also employed as an author, producer, director, cameraman, editor and modeler. Together with some friends he had to borrow money to afford a camera and the necessary material can. James Cameron gained important experience through this project, even though the short film was unsuccessful. From this failure but he could not be beaten and competed at a production company in order to advance his career. Behind the scenes, he worked as a model maker and was responsible for the special effects. Here he had to constantly come up with new tricks and special effects that have been demanded by the directors. But James Cameron wanted more, he wanted to produce their own films and be a director responsible. Therefore, he was very ambitious and constantly worked on and continued his to be better than all its competitors. By the way, he wrote repeatedly screenplays, but hardly anyone was interested.

At the age of 28 years James Cameron woke up one night in a cold sweat, because he had had a nightmare. From a wall of flame rose from a fearsome robot that looked like a human skeleton. This dream did not let go of him and James Cameron wrote a very short time a script to. He became obsessed with his film, but he had no money to realize his idea. And so he sold his script for a dollar to a producer against a promise that he himself could be directing the film. But it would take another two years, until enough money was available for the film in order to finance it can.

Although James Cameron had to shoot his film on a low budget, but he was able to make as a director everything exactly as he imagined it at last, and this was for him the most important argument. In 1984, the science fiction movie "Terminator" was seen with actor Arnold Schwarzenegger for the first time in theaters, people were immediately enthusiastic about it. The special talent of James Cameron for special effects to "Terminator" has become one of the most influential science fiction movies in film history and was also awarded as the best science fiction film of 1984. The then unknown director James Cameron became an overnight famous worldwide and grew to be a Superstar in the film industry on.

This success opened for James Cameron many locked doors and suddenly he had more money and sponsors are available in order to produce his movies. From this time he made many films that should be remembered as milestones in the history of film. Among them were films like "Aliens - The Return", "Abyss - abyss of death", "Terminator 2" or "Titanic". He had constantly new ideas and revolutionized with his trick technology and its computer animation the entire film industry. He founded his own special effects company where he could fiddle with new ideas again and again. An invention he developed over several years, but this new camera technology was again revolutionary. James Cameron turned his sensational science fiction film "Avatar" with newly developed 3D cameras and thereby changes the whole film world. Everywhere around the world people marveled over the unprecedented 3D effects.

James Cameron rose from truck drivers to an absolute superstar in the film industry on. Although he never attended a film academy, he always believed in his talent and his film knowledge brought in by yourself. With tremendous will, he drove his career ahead constantly and never lost heart by financial constraints. James Cameron dreamed not only by the success, he worked hard every day for it to realize his dreams also. Until he actually managed.

James Cameron: "You have to make yourself your dreams come true"