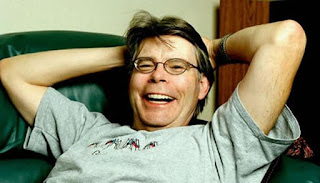 Stephen King was born (USA) in the port city of Portland on September 21, 1947. When he was very young, her father left the family, and so the mother had to alone take care of him and his brother. With poorly paid odd jobs the mother worked tirelessly to provide for their sons somehow can. The family often had to move in miserable places, because you just could not afford better district itself. Despite these arduous childhood Stephen King developed at the age of seven years to write stories that passion. He often read science fiction books and fantasy movies watched with fondness at the cinema, he developed a particular enthusiasm for horror stories.

Stephen King: "It was tough. My mother had to do three jobs to get us through "

In high school, Stephen King wrote repeatedly short stories, but which hardly received attention. Through a grant from Stephen King came to the University, where he successfully "English" studied to become a teacher. During this time he met his wife, whom he married shortly after graduating. Since he found no teaching job at the start, Stephen King had to move with his wife in a rented caravan, as they could not afford to live. He began to work in a laundry, in order to provide them with the miserable salary the family.

Stephen King: "I have worked in the laundry and at the gas station"

In his spare time Stephen King went on writing his stories, especially at night and on weekends. But his novels were not considered by the publishers and he began to doubt his literary talent. When he still not moved forward with his latest book "Carrie", Stephen King was devastated. He threw the written pages in the trash because he believed that his horror story simply was not good enough. But his wife, who was always convinced of his talent, the crumpled sheets fished out again and began to read. Immediately, she encouraged her husband to continue working on his manuscript because it was inspired by this extraordinary story.

Stephen King scooped by his wife new hope and began to finish his novel on his portable typewriter. But although he did not think that his book would be interested in someone who acquired a large publishing company the rights to this story. A short time later the first books of "Carrie" have been sold and the sales figures developed abruptly upwards. When his horror novel was also made into a film with great success, made this Stephen King known worldwide. He moved with his family from the humble caravan because he finally could afford her own apartment located. In addition, he decided through his meteoric career, just being more active as a writer.

His next horror stories developed invariably bestsellers. People were enthusiastic about his creepy books like "The Shining", "Christine" or "It" and many of his stories have been used as a model for commercially very effective films. As Stephen King now had a very meaningful name as a writer, he was also able to sell without difficulty those stories, which were at that time rejected by the publishers.

Stephen King doubted long on his literary quality. But it was always his wife, who gave him the courage to never give up hope. Through this support to Stephen King has become one of the most popular and most widely read writers in the world. His greatest gift was to arouse horror and fear among the people, and this was also its sure success secret.