Quentin Tarantino: "My whole career is based on courage" 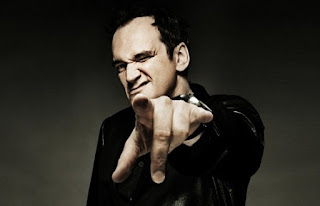 Quentin Tarantino was born on March 27, 1963 in Knoxville, Tennessee (USA). The parents separated shortly after his birth, and so his mother moved with him to Los Angeles, where she reared him alone. Even as a child was his great passion the film, he spent his spare time for this reason mainly in small suburban cinemas in the south of Los Angeles. At school the other hand, Quentin did very difficult as dyslexic, although he was considered a highly intelligent child. The more he fled consisting of television, cinema and comics in his beloved world. At the age of 15, he broke the hated school from, to devote himself fully to his passion and took acting lessons. Quentin now had to accept smaller part-time jobs in order to stay afloat. Including a job was in a porn cinema, where he worked as an usher and ticket-.

By now he had acquired such an extensive movie knowledge by his passion for film, he was able to get a job in a famous video library. There he could now consider movies all day and had people with the same interests around. Quentin realized that his place was more behind the camera and began writing screenplays. Soon he had his first screenplay "The Open Road" finished. Since the script turned out far too long with over 500 pages, he halved it in the films "True Romance" and "Natural Born Killers". But Hollywood was not interested in his ideas and Quentin Tarantino, it kept trying in vain to find investors for his films.

Despite these failures Quentin Tarantino did not give up and tried his next film, to produce "Reservoir Dogs" itself, he was scriptwriter, director and actor at the same time. Without ever having visited a proper film school, he made it through his talent, his first film with the help of a few supporters actually finish. In 1992, "Reservoir Dogs" was released, the critics suggested enthusiasm. Almost overnight, the director Quentin Tarantino was known and suddenly for his pre-written screenplays were found quickly purchasers. With his second film he should finally ascend to the cult director: "Pulp Fiction" beat a world like a bomb. Despite modest means, this film was a fantastic success and earned him numerous Oscar nominations. Quentin Tarantino did not follow other directors, but went bravely his right for him way and this courage was rewarded.

Quentin Tarantino: "I'm an artist, my art is the cinema. What do I know about movies, I have taught myself "

Quentin Tarantino never went to film school for directors, he dropped out of school and earned his money with inferior jobs for which he was never too bad. But despite everything, he always believed in its strength and always went to his great passion, the film, after. And this determination and perseverance, it was they who helped him to a major breakthrough. This was followed by further films like "From Dusk Till Dawn", "Kill Bill" or "Inglourious Basterds". His extensive film knowledge through his work as Videothekar are still inspiration for his films and make Quentin Tarantino unique in the world of film directors.

Quentin Tarantino: "My whole career is based on courage. I do not make films for the moment. I make movies for the next 40 years "