Bill Gates: "I love my job, it is immensely fascinating" 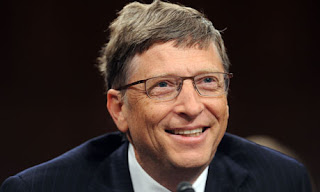 William "Bill" Henry Gates III was born on October 28, 1955 in Seattle, Washington (USA). His parents were wealthy, his father was a lawyer, his mother was a teacher. In elementary school, Bill excelled in mathematics and science, and a very young age he began to be interested in business and politics. His father liked the setting and coined Bill with his experience as a lawyer for commercial law. But with the growing interest in world affairs, there were soon problems with the rebellious son and there were often disputes with parents. Although no other child was as smart as Bill, but he also refused persistently to obey his parents.

Bill wanted to be independent early on and therefore eluded increasingly the control of his parents. And so it was a case for the psychologists, as the helpless parents no longer knew. After one year of therapy overstrained psychologist counsel had only to parents: you should adapt Bill rather because there was no point trying to control him, because he was not controllable. The parents took this wise counsel to heart and sent Bill at the age of 13 years in the private Lakeside School, where he should have more freedom than in a normal school.

He first came into contact with a primitive computer and Bill began to program the computer with programs. From now on, the school was secondary, because Bill Gates had now found a particular challenge. He and his former school friend Paul Allen played hooky teaching again and sneaked into the night in the school building in order to be able to secretly write programs. They soon dominated the computer better than the teachers and developed first program projects for the school. Although Bill only dealt with the programming, he managed to finish school because of his intelligence without problems.

1973 Bill went to Harvard University to study, but again spent most of his time in the computer room. When a short time later the world's first minicomputer came as a kit on the market, he recognized the opportunity, because the unit was virtually useless without user-friendly interface. To be able to concentrate from now on entirely on his specialty, Bill broke off his studies and in 1975 founded with his school friend Paul Allen, the company "Micro-Soft" (later the hyphen is omitted). First small successes came, but Microsoft was a small company with many computer companies, because there were many different programming languages, and none had been enforced. This should change when in 1981 suddenly a call from the company IBM, the then largest companies for large-scale computer systems and hardware manufacturing came.

IBM then scored billion revenue from mainframe systems only for large companies and government agencies could afford at the time. As previously more and more manufacturers cost in the years minicomputer manufactured (personal computer) for the average person, you would not inferior to longer and developed his own little PC here. For IBM it would have been a trifle, to develop its own operating system, but you took the PC market is not really serious. For IBM it was an impossibility that any household need a PC and would also be used, and so we got in touch with Bill Gates to come to a suitable operating system.

The negotiators of the multi-billion dollar company IBM thought that they would have to deal with a harmless computer geek, they could be fobbed off quickly and cheaply. Even when they saw Bill Gates for the first time, they took him by his appearance only for a simple office boy. But what they did not know was that they had embarked on a person who was born to tear power and profit per se and the perfectly mastered the language of contracts as a child of a lawyer. And so an unassuming contract was negotiated, but should be one of the most serious errors in economic history from the perspective of IBM.

The first operating system MS-DOS was soon replaced by its successor Windows. In 1995, when "Windows 95" came on the market, Microsoft had a market share of over 90 percent. And Bill Gates built his dominance sent out, he developed his own office software "Office" and was active in many other areas of software production. By the dominant position of Microsoft, there were soon many critics. They criticized the monopolistic attitude of Bill Gates and the anti-competitive business strategy to attract and retain customers to Microsoft.

But the success was Bill Gates right. Microsoft has developed into one of the largest and most profitable companies in the world. He achieved this through his foresight in market issues, his flair for technology and his special negotiating skills. Bill Gates was the deal with IBM at the right time at the right place and negotiated as rank outsiders into an agreement with the most powerful managers in the world, which was just awesome. Presumably, Microsoft would be present without this deal a small software company among many competitors.

Bill Gates: "I love my job, it is immensely fascinating, time and again to find new solutions for this world"

Today we speak of the greatest entrepreneurial success story of the 20th century. Bill Gates was 31 years to the then youngest self-made billionaire in history and later the richest people in the world. Today he supports with his wife numerous health projects in the Third World and donates much of his fortune for these purposes.