Vin Diesel: "You can do anything if you just want to" 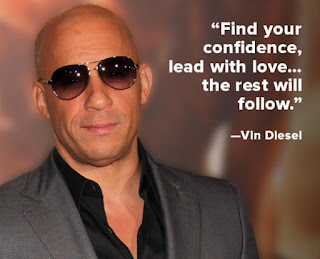 Vin Diesel or (Mark Sinclair Vincent) was born on July 18, 1967 in New York. His biological father he never knew, and he was raised by his mother and a stepfather. At the tender age of seven, his life took a fateful turn when he broke with his mini-course in the Jane Street Theater to ravage it. But in the midst of their destructive they were caught in the act. And it should be followed by a penalty that it had really something. From now on, the tots had to play as a punishment theater, and they had every day after school come to rehearse. It was an unusual punishment, but Vin Diesel recognized by very quickly his passion for acting and he should remain. He played more roles in various New York theaters, however, were poorly paid. And they brought Vin Diesel no closer to his dream of one day becoming a famous actor.

Again and again, Vin Diesel with various odd jobs needed to earn money. Whether as a street performer, as a truck driver or as moving supplies. But the role as a bouncer told him about the most, because of its already well-toned body and his deep voice this job was ideal for him. In terms of time this work was perfect for him, on the night he was a bouncer in the New York nightclub scene, on the day he had time for the theater and acting. So carefree working as a bouncer was beginning, the work was more dangerous over time. A co-worker and friend of Vin Diesel narrowly escaped death when a man went crazy and he slashed their throats, as they had denied him the inlet. A short time later, another bouncer was just shot. For Vin Diesel, the job had lost its appeal, and the risk that something would happen to him once was constantly given, and so he gave the job to all nine years. Vin Diesel wanted to put everything on one card - interrupted his studies at the College for three years and went to Hollywood to become a great actor.

Vin Diesel quickly believed because of his long-standing career in the theater a role in a movie to be able to get. But this should prove to be a great misconception soon, in many auditions he was mercilessly rejected. Vin Diesel got no chance to put his acting talent. And so he returned crestfallen to New York with the knowledge might never become a great and famous actor.

But his mother still believed in his talent and gave him the book "Feature Films at Used Car Prices" (feature films on used car prices). Vin Diesel saw this as the last chance to, but to be more successful. He now had the opportunity to implement their own ideas and not to be dependent on other people. And so realized Vin Diesel his first short film ("Multi Facial") with a budget of only 3,000 dollars. He not only wrote the script himself and played the lead role, but also directed and produced the film itself, in just three days, the short film was filmed. The project went into the Manhattan Film Archive was founded in 1995 and proposed for the Film Festival in Cannes (France), where the film actually was a great success. Vin Diesel had taken a real test of talent, and returned full of energy back to New York. But how could it happen next, and how could he manage to be a well-known Hollywood actor? Then came an unexpected call.

At the apparatus was none other than the great director Steven Spielberg, who had accidentally seen his short film "Multi Facial". He loved this short film and he liked the young actor so much that he asked for a meeting Vin Diesel. Steven Spielberg was just looking for actors for his latest project, the film "Saving Private Ryan", and so he offered Vin Diesel a supporting role in this movie. It was like a dream, Vin Diesel had just got his first major role in a major film. And this should mean his final breakthrough in Hollywood. This was followed by films like "Pitch Black", "The Fast and the Furious," "Triple X" and many other films.

Vin Diesel had managed the small bouncer at a famous Hollywood actor. He has been able to exploit the opportunities offered to him and to convert it into success. He took the opportunity at an early age in the theater, where he was very well educated, and he used the gift of his mother to produce their own short film and to make the great director Steven Spielberg noticed him. Vin Diesel believed in his talent and was never deterred by various failures of his goal. For each of us, opportunities can arise again and again in life, but is crucial to recognize and take advantage of this.

Vin Diesel: "You can do anything if you just want to"