The Success Story from Chris Gardner 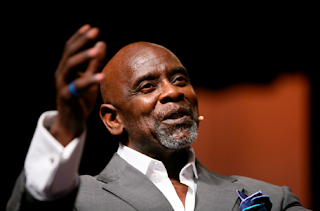 Chris Gardner was born on February 09 1954 in Milwaukee (USA) where he grew up under the worst conditions. His biological father he did not know, the stepfather he was beaten regularly by his overburdened mother, he was brought into a home. Later, Chris moved to San Francisco, where he lived with his girlfriend Linda and his young son Christopher at the poverty level. He worked as a representative for medical devices, however, he could rarely sell. And so went by the day the debt and the financial pressure was getting bigger, until his girlfriend lost patience and therefore left him - the son remained with his father. Chris knew that his life on the edge of the abyss so could not go on.

In this difficult time it came to a key moment in Chris Gardner's life when he a well-dressed man in a red Ferrari (who fascinated him immediately) asked what he was doing and especially how he did it. The man was a stockbroker and earned about 80,000 dollars a month. Henceforth knew Chris, that he wanted to do in the financial industry career. His goal was to become like this man to live in prosperity and to have their own Ferrari. But times were hard, and the current economic crisis made it not necessarily easier to reach a certain level of prosperity.

So a candidate had never been in front of Martin Frohm from reputable stockbroker Dean Witter &. Before him stood a man with jeans and undershirt, perspiring, unwashed and everywhere full of white paint. Chris Gardner had to spend a night in jail because he could not pay the fines, which he had amassed in front of hospitals to its success equipment for sale. And so he asked Chris: "What would you probably say if I hire someone to come to the interview with no shirt?" Chris Gardner's answer was not long in coming and was an expression of his attitude, standing with her back to the wall and yet full Confidence: "He must have worn a damn chic trousers." And he actually managed and landed after several attempts an internship at the investment firm Dean Witter Reynolds.

But who would have thought that it would go from now on uphill with Chris and his struggle for a better life, which should be wrong. The minimum internship salary was not enough for himself and his son, also because he had to pay for day care for his son to work during the day can. Chris Gardner was broke, and so he and his son were homeless. They slept in cheap dismount, the homeless shelter in the church, in the railway station toilets or under his desk. Colleagues at Dean Witter were unaware of during the day Chris was a normal fellow, but at night he fought with his son for survival. He was constantly having to worry about his son under stress and withstand the pressure in the work to be faster and better than all the other colleagues. All this for an internship that his last chance was still the curve to scratch in his life. But Chris Gardner had no choice.

With their backs to the wall Chris Gardner fought for nearly a year when placement until you drop. For a better life in prosperity, for a better life for his son, who repeatedly gave power endure him. Chris Gardner was not the most educated, the College he had the money from it, but with his astonishing ambition and belief in himself, he managed the impossible. Chris Gardner had overtaken all its competitors without any prior knowledge and was the only student for a job. Soon he was able to re-rent an apartment and his financial worries were soon to the past. Chris was very talented and later founded his own company with a starting capital of $ 10,000, and its securities business should evolve magnificently.

Today Chris Gardner is a multimillionaire and supports numerous charities, including the Glide Memorial United Methodist Church in San Francisco, in which he had with his son once found refuge. He wrote down his life - his book immediately conquered the top of the US bestseller list. His story became a movie - under the title "The Pursuit of Happyness" where Will Smith and his son Jaden played the leading roles, the film was an incredible success. From the former basketball star Michael Jordan, he bought a Ferrari - and this was the time when he had actually done symbolically.

Chris Gardner dreamed not only of success, prosperity and security. He was awake and working hard for a better life and managed to realize his dream despite all obstacles and setbacks. He made his "American Dream" come true - although nothing was paid to him in life - quite the contrary. Chris Gardner keeps us in mind that it does not matter where you stand in life, but it matters what you make of it!