I'm Paul Potts and this is what I'm doing 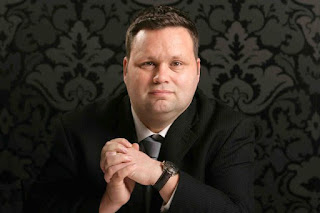 Paul Potts was born on 13 October 1970 in a suburb of Bistrol (South West of England). From a young age he discovered his passion for music, with six years he wanted to become a priest, for example - because the had the best job in the world, because they were allowed to sing every Sunday in front of the gathered congregation. Paul was a thick royal and shy child and was therefore ridiculed at school repeatedly and humiliated. His only lifeline he found in his impressive voice even then, and he came at an early age the local church choir in order to comply with his passion for singing. It offered him the opportunity to escape from a cruel reality and to create his own little world.

Paul Potts: "I instinctively realized that my voice is my only real friend"

When he bought at age 16 his first opera record ("La Bohème"), he discovered his passion for this style of music. Paul made his singing voice by privately funded education continues and soon invested his life savings in a three-month stay in Italy to learn Upper singing. He had talent, but his lack of self-confidence was him simply in the way and prevented his breakthrough. Again and again he graduated performances at amateur level, but without any success. 2003 remained faithful to him the misfortune, a Blinddarmdurchruch it was diagnosed with, additionally doing a benign tumor on the adrenal gland was found and Paul had to be operated. The healing after the operation went well, but just on the mend plunged Paul by bike and broke his collarbone. Paul Potts, it was impossible to continue his career with this pain and fell into depression. Paul Potts no longer believed in his talent, also because not a single record company had reacted to his demo tapes only once. Was this the final end before it had ever gone off right?

Paul Potts: "For me it was really very, very bad and the last thing I thought I was singing"

Paul Potts worked from now on in a supermarket chain and to maintain later as a seller of mobile phones, and his wife afloat. His passion as a singer he had repressed. As Paul accidentally received a promotional message for new talent show "Britain`s Got Talent" in 2007, but he came to ponder. He threw a coin in the air, and when she landed on the right page, he overcame and sent from the registration form. Britain`s Got Talent is a talent show, where people appeared with very different talents and were evaluated by a jury, similar to the German format "Germany seeks the superstar" ("DSDS"). Now it was time, the 36-year-old Paul Potts stood right before his last appearance perhaps because another failure could and he did not want to handle. But the signs were bad. In front of him a couple was booed and jeered loudly the audience thirsting for blood formally and the atmosphere was more than heated.

Paul Potts: "I asked myself: What do I allow myself here just one? I had no confidence that anything positive would come of it "

And so came into the inhibited Paul Potts with a 35-pound suit the stage and stepped forward to the mark. His expression was pained, and every spectator noticed his boundless nervous. When he wanting to sing an opera also announced the juror Simon Colwell, who was known for his extravagant sayings twisted (the "Dieter Bohlen" the show), already disbelieving eyes. The whole audience expected an embarrassing notion in their faces showed discontent and disaffection. Paul Potts was about to turn and run away, but he was paralyzed at that moment. Suddenly the music started playing - and Paul was in the he felt again in his world as well. He began to sing, and forget everything else around.

Paul Potts: "When I stopped singing, my heart raced like crazy, because I had absolutely no idea what would the jury members say"

As Paul Potts had his aria from the opera ends of Puccini`s "Nessun Dorma", there was silence. He thought of a complete failure. But suddenly burst of cheering and applause among the spectators and there was "standing ovations" for this incredible performance. The jury was speechless because this imposing voice and as remarked Paul Potts first stirred the faces of the people and most of them had tears in their eyes - as well as in the otherwise hard juror Amanda Halden. Paul Potts wowed the audience, the judges and millions of viewers watching television. And they chose Paul Potts some time later the winner of the show, where more than 40% of all British zeitweillig watched.

Paul Potts had his breakthrough finally managed a short time later he appeared before the British Queen Elizabeth II and recorded his first album. Had there not been "Britain`s Got Talent" Paul Potts singing could possibly completely abandoned. However, a registration and an appearance later changed the lives of the sympathetic British. Often lacking in life only a crucial idea to realize his dreams. In the life of Paul Potts, it was the application to this a talent show to bring him on the right track.

Paul Potts: "It changed my whole life. I felt so small and insignificant. But now I am somebody - I'm Paul Potts and this is what I'm doing "