Mario Galla: "Do it stirred when someone writes me that I make him courage" 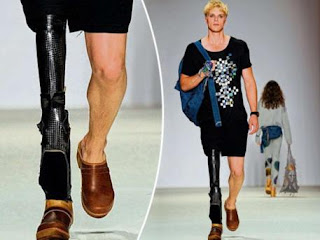 Mario Galla was born on 02 July 1985, was suffering from his birth to a strong femoral shortening, he already had to wear as a child prosthesis. But he never saw himself as a victim but always tried to do things that made even healthy children. But his mother had long struggle to get the health insurance a special prosthesis, with which he could also operate sports. Mario Galla got after a long discussion this prosthesis and played enthusiastically basketball or football.

Mario Galla: "In sports, I always had a one, and to compete with non-disabled people"

Mario Galla made his life just like any other man and saw his disability never at a disadvantage. Nevertheless, there have always been people who favored, but Mario Galla tried him because of his disability, they are not to be taken seriously and to go on his way. One day he was in a fast food restaurant, when suddenly approached a model scout. Mario Galla received an invitation to a casting, but what the talent scouts did not see was the artificial leg, which was under the pants. Mario Galla now had to make a brave decision, because he knew that the world of modeling was perfect and people with disabilities in the industry had virtually no opportunities.

Mario Galla made the bold decision to attend this casting. Since he otherwise had perfect model dimensions, he was actually hired by this agency. When he then his prosthetic leg made public, the surprise was big but we still believed still to Mario Galla, who had a great charisma. In the beginning he got almost no jobs, but suddenly he had his first big job for Hugo Boss, a world famous clothing manufacturer. Mario Galla impressed with this job with charisma and passion, his disability came into the background.

Mario Galla: "I ask for many is a risk factor, because few have experience with people who have handicap"

Mario Galla kept fighting, though his disability repeatedly cost jobs and it was rejected. Over time, however, he was able to because of his great talent to make a name in the industry and has now received more orders for jobs. He was booked for the Fashion Week in Berlin and made here a sensation because he was actually in shorts with his artificial leg on the catwalk. But Mario Galla also impressed here by a dignified and mellow run, although he was just surrounded by astonished onlookers.

Mario Galla abolished shortly after his international breakthrough, he was booked by well-known designers and was soon in Milan or Paris. He became a model for many people in the world who must also cope with a disability through its positive approach to his disability. Mario Galla gives them courage and confidence, not to be defeated despite deprivation and always make the most of his life.

Mario Galla: "Do it stirred when someone writes me that I make him courage"