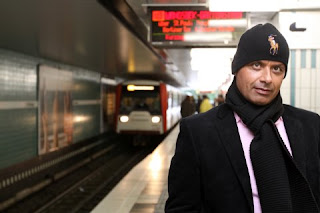 At the age of 15 years Saliya Kahawatte just kept a lecture at school, when his records were always blurred suddenly and he could no longer read. Saliya Kahawatte was very worried because a few days later, he could barely see. The doctor's diagnosis was devastating, because it was found an acute retinal detachment. The prescription of Saliya Kahawatte soon sank to about 5 percent and a gray veil fell over his world, with no chance of improvement. In a conversation with a disabled representative wanted to deport him immediately in a workshop for the blind, because he was told that he could go no further on a normal school. But Saliya Kahawatte wanted to stay in his school and necessarily make his baccalaureate. He met the daring conclusion that he wanted to try it despite its low visual acuity.

Saliya Kahawatte: "If I put something in my head, then I prefer that through"

The carefree life of Saliya Kahawatte was abruptly over. With a monstrous effort he now had to cope with everyday life at school. While other students their notes written on scraps of paper, he kept the notes in his head. He constantly had to repeat what he heard in the classroom so as not to forget it. In the evening he had read to his sister or his mother's textbooks because he just could not read to save the contents in his head. Despite some derogatory comments against him at school, he trained his brain continues to save what is heard better. Saliya Kahawatte actually managed the impossible and worked with great willpower graduated from high school.

For his next project his doctors and authorities said a safe failure ahead, Saliya Kahawatte remained stubborn and began a career in the hospitality industry. He concealed the fact that he was almost blind, and was able to get hold of an apprenticeship, which he would probably not otherwise get. But now he was under pressure eerie, because no one could remember anything about his disability. The hardships that had to take Saliya Kahawatte now to be had, unbelievable.

Saliya Kahawatte: "In order to get a training center at the hotel, I had to conceal my eyes weakness"

No one suspected that Saliya Kahawatte counted the stairs to get to their destination. The drinks menu and the prices he learned by heart, and he perfected his hearing. What sounded a polished wineglass compared to a unpolished wineglass? With a lot of practice he learned through his ear, just pour the wine to the filling mark. In the evening, he stayed on to sort the wine cellar to its own system, in the morning he came earlier to the setting of the tables to be able to use your fingers for measuring of distances. Again and again he let himself think of new tricks in order not to attract attention because of his disability. Saliya Kahawatte worked his way from a simple waiter to the restaurant ladder. If a situation emerged where he could not respond as quickly, he stood just stupid and obtuse. But the pressure rose continuously, a small error would be enough, and you would notice his deterioration immediately.

Saliya Kahawatte: "Although I had developed my security mechanisms, my nerves were permanently blank. I got used to the lies and have denied myself "

The ongoing physical and emotional burdens soon had a negative impact. Saliya Kahawatte handle increasingly to alcohol and drugs to cope with stressful situations. At that time, a tumor was discovered in even his abdomen, he defeated the cancer through a subsequent chemotherapy, yet his hip was destroyed. Saliya Kahawatte received a hip replacement and that could take up his original work again, but soon got problems with his hip. The doctor told him that it was time for an office job, but this was impossible to cope with for Saliya Kahawatte. His whole future was now at stake and he was trying to escape this pressure with more alcohol and drugs. The psychological distress was soon so great that Saliya Kahawatte suffered a total collapse and he wanted to commit suicide.

Saliya Kahawatte came a few months in a mental hospital, the many years, where he had to hide his disability and the subsequent drug problem had made him very unhappy. Now he wanted to make a completely fresh start without lies, but with his openness about his visual impairment and his artificial hip joint it rained only rejections and devastating remarks. They wanted Saliya Kahawatte again stuck in a handicapped facility, but again he fought back. Against the odds, he now began to study hotel business, he made this fact without any problems and with a fantastic grade point average. Although the people admired the performance of Saliya Kahawatte, but not wanted to give him a job, and so he was unemployed, despite the best training.

Saliya Kahawatte but did not let it get to and decided to become self-employed in spite of their disability. His newly founded company grew so magnificent that he could hire new employees soon that could help him, where he had disadvantages because of his visual impairment. He was now working through his extensive experience as a coach and consultant and offered various seminars. His clients trusted him, because in his person they saw that you could use a crisis for a happy turn of one's life. His workday, he had of course change again. He had a program that could read him the e-mail or a special reader, where you could enlarge text on the screen. But despite his visual impairment managed Saliya Kahawatte that he could do his job successfully and to the complete satisfaction of its customers.

Saliya Kahawatte had to overcome so many tragedies that many people would be broken by it. He pointed unfassbarem will, that you can achieve anything in life with a lot of ambition, endurance and stamina. He became a model for many disabled people to always believe in yourself and not to let it get through bad speakers.

Saliya Kahawatte: "In my experience, most people keep things they do not know, impossible and restrict themselves and others thereby"