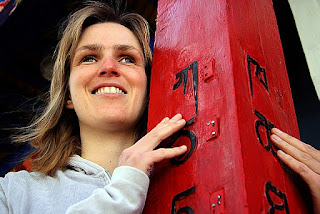 Sabriye Tenberken was born on September 19, 1970 in Cologne (Germany). A congenital retinal disease of the eyes they slowly began to go blind as early as the age of nine. This creeping blindness was a strong psychological burden for the little girl, because she knew that she would soon see nothing more in the world. Life became increasingly difficult for Sabriye because with the diminishing eyesight, she was increasingly becoming an outsider. Teachers no longer took seriously and the other children played their evil tricks.

Sabriye: "Children can be very common: Oh, since you can run quietly long, there is nothing. And then suddenly I fall down the stairs "

At the age of twelve years, then joined the sad certainty and the girl was totally blind. Sabriye was completely distraught and was terrified to be alone from now on. She could not really come to terms with their fate, not until she came to a school for the blind, they began to hope again. They made new friends and at breakneck speed she studied Braille (Braille) and was also very active in sports. She was a very good student and managed easily graduated, but now she wanted to continue studying. She began studying under the Central Asia-sciences with a focus on "Tibet" and "Mongolia". As previously, no blind man had dared to this degree, Sabriye had invent their own methods to cope with the study can.

At the age of 22 years she developed for this reason an own Tibetan Braille, which was based on the Braille. It was the first own Braille for Tibet because such a thing had not yet given up now. In order to deepen their knowledge yet, Sabriye traveled to Tibet (Central Asia), there to investigate the living conditions of blind people. However, she was shocked, was how to deal with blind people in this area. Blind children are abandoned by their parents or were simply tied to the bed. There were no device that took care of blind people, and so had most of the blind, expelled from the society, spend their lives in complete seclusion and in poverty. Sabriye could hardly believe these bad states and wanted to do something about it.

They wanted to start a blind owe in Tibet that should be dedicated to the literacy of blind children. But she found little support, because anyone who wanted to help a blind woman, to implement such a large project? But Sabriye did not get them down and fought doggedly to their plans. She embarked on difficult trips to the most remote villages to convince parents to give her blind child into their care. Against the odds, the authorities she was not intimidated because they simply wanted to allow blind people a better life. They soon found the first blind children for their school and so 1998 became the first blind center was actually founded in Tibet. She was supported by her partner Paul Kronenberg, who actively supported this.

In addition to the Braille also many practical things were taught how to use, for example, with a cane, or how to orient themselves as a blind person in a city. Because many children had psychological problems, Sabriye sought to promote the strengths of the children in order to integrate them back into society. A Tibetan boy wanted, for example, like to be a cheese (cheese maker), and so he was allowed to go to Holland in the doctrine. On his return to Tibet, he was a successful businessman for cheese production, although he was blind. For this reason was later also built its own training farm for dairy in Tibet, to allow blind people receive vocational training.

Sabriye: "It is not necessary to make the world accessible to blind people. It is important to recognize the abilities of the blind and to strengthen and to prepare them for the world "

The school for the blind now constantly continued to grow, Sabriye now formed from other teachers who also were able to teach the children. She cared especially about the communication with the authorities and other international organizations. Through numerous media appearances, she gained the necessary donations to the school fund can and also to realize other projects for blind people. Together with her partner she was already planning programs for the blind in India, and for this reason they founded the international charity "Braille Without Borders" for the blind in developing countries. Of central importance was teaching the Braille to blind people. Additionally, it should for those languages ​​where a Braille did not exist, a separate language code to be developed, so as Sabriye it had once done for Tibet.

Sabriye managed in spite of their disability, to create the first school for the blind in Tibet. With great willpower and determination she overcame obstacles to which most people would have failed. And this was their most important message to all the blind people in the world, because if you fight and believe in yourself, you can achieve anything in life. She has already released many blind children from absolute poverty and made them outcasts of society to people who can proudly feed their families today. Braille, the Sabriye had developed for Tibet, is today recognized and official Braille in Tibet.

Sabriye: "From a distance, sometimes seem unsolvable problems. And when one is in front of it, then one understands only, here is a gap because I can by "