Where I could express myself for me

Nobuyuki Tsujii was born (the capital of Japan) on September 13, 1988 in Tokyo, but he was blind from birth. His mother recognized but very quickly a musical talent to her son, because every time she heard classical music, he hopped around happily and responded very positively to it. Especially the piano composer Frederic Chopin had done it to the boy, because he heard the best by far. Because of his passion for music from his mother got a small toy piano.

Nobuyuki Tsujii, "My favorite piece was then Chopin's Polonaise in A Flat Major, at a certain shooting I joyfully responded'm hopped, but if another pianist has played the same piece, I was dissatisfied" 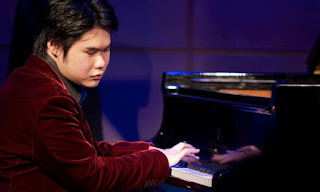 As his mother once sang the famous song "Jingle Bells", they could not believe how the little boy responded hardly. Because despite his blindness he managed replay the melody on his little plastic piano. Nobuyuki Tsujii had an incredibly sensitive hearing and played from now on everything by what he heard and what he liked.

Nobuyuki Tsujii: "I loved the piano as a child. It has replaced my toys - it is a friend to me "

Because of his extraordinary talent he was soon a larger piano and also received lessons by a piano teacher, but it was a very painstaking. Nobuyuki Tsujii had the pieces in Braille (Braille) memorize. While one hand was reading the notes, he was playing with the other hand. In order to play with both hands, but he had to know by heart all the sounds, and so Nobuyuki Tsujii practiced for hours at his piano and in time he was actually better. Despite his visual impairment he met with various aids his favorite classical music pieces and could soon enact effortlessly and out.

Nobuyuki Tsujii, "I have never felt the practice as a burden that was playing outside, my favorite thing, where I could express myself for me, like other children"

At the age of ten years Nobuyuki Tsujii was already with the "Osaka Century Symphony" on the stage, because his way he was able to interpret the music, was fascinating and unique. He trained from now on up to four hours a day to improve his piano playing, and this training should pay off soon. In 2009, Nobuyuki Tsujii traveled to Texas (USA) in order to meet an international piano competition where the world's best young concert pianists participated. Now on the multi-day competition, he had every day with the greatest nervous tension prove his talent, because this error he could not afford. And Nobuyuki Tsujii made no mistakes.

With incredible security, the young pianist played in the hearts of men. The judges were amazed at the blind musician who could play the most famous works from Beethoven to Chopin so properly and sensitively as they had never heard of it. Nobuyuki Tsujii managed one of the biggest upsets in the history of this international competition, because it was not only the first Japanese to win the contest, he was also the first artist to have won him as a blind pianist.

Nobuyuki Tsujii was in his native Japan and in China a celebrated star, its classical music works have been an absolute bestseller. He is now all over the world traveling and playing on the biggest concert stages. Even the most critical listener, he was able to convince by his soulful tones, because even the greatest sleight of hand can not replace the feeling and sense, can play his works with Nobuyuki Tsujii.

Nobuyuki Tsujii, "I want to play what I myself love. I associate a lot with the pieces. And I want to show the audience, as I see it "

Although he was blind from birth, Nobuyuki Tsujii was always his greatest passion. For hours he trained at an incredible perfection at the piano and all pieces of music he learned only through his hearing. This combination of hard training and his special talent helped him to become the absolute superstar in classical music. He also works without problems with orchestras, although he can see neither the conductor nor the orchestra. Again and again, people marvel at this fascinating collaboration with the blind pianist from Japan, who has made his biggest handicap to its greatest strength.

Nobuyuki Tsujii, "I feel like the conductor breathing, I have the baton can not see to get the application. I also feel that the orchestra musicians want, which is like a wave that flows to me and I have to follow "