They have not seen me as a blind person 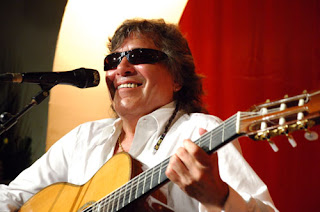 José Feliciano was born on September 10, 1945 in Puerto Rico (small island state in the Caribbean) as a child of poor parents. Because of a congenital glaucoma, he was blind since his birth, a life of discrimination and poverty was inevitable for him. Since his musical talent did not help because he could already drumming rhythmically to the age of three cookie jars. In 1950 the family moved into a poor neighborhood in New York, where they had to fight for survival among poor families.

José Feliciano was strongly disadvantaged by his blindness, and spent many lonely hours in his room. His only solace he found in the music, which should represent him in his secluded life the only ray of hope. For hours, he heard music on the radio, or listened to old records. He worked on many musical instruments, but he was most like the guitar, on which he practiced obsessively, day and night. Although he could not read music as a blind child, he mastered the guitar soon so perfect that it surprised a lot of friends of the family. And José Feliciano wanted more. He did not because he was blind, are excluded from society.

At the age of 17 he made the decision to leave school, to now be able to fully concentrate on the music and money to earn for his family. He played mostly on the road and performed in various cafes and clubs. The little money he earned doing, was just enough to get somehow make ends meet. But José Feliciano loved music and thrilled with his incredible passion for singing with his guitar playing always the people. And so it happened that in one of his performances, a talent scout was in the audience, who actually wanted to test another musician. This was, however, by the extraordinary and amazing performance from the blind singer so excited that he immediately took him under contract to produce with him a plate.

Through his expressive style of music José Feliciano soon had an incredibly large fan base, because there was no other musician who practiced this profession with so much heart and devotion. In the following years, numerous hits including "Che Sara" who made known internationally the blind musician. And José Feliciano was a fun-loving man who would not let it get by his fate to be blind.

On his computer, he read in Braille (Braille) books, he sent automatically emails and texted songs. José Feliciano was a very resourceful man, as he looked with liking baseball games at the stadium. He could not see the game, but he always took a small radio with so he could hear the comments of the sports reporter, and he always knew what was happening on the pitch and was also the atmosphere in the stadium enjoying.

José Feliciano sold worldwide more than 100 million records, he received several Grammy Awards and was honored with a star on the famous Hollywood "Walk of Fame". The musician composed many famous hits, but a song plays at Christmas time to this day over and over again in people's hearts.

With the song "Feliz Navidad" ("Merry Christmas") he made an incredible success story. It is still one of the most famous Christmas songs in the world, and is unlike any other song for a merry and happy Christmas. Whenever "Feliz Navidad" is played, it lifts the mood of the people. This song is not just for a merry Christmas, but for a man who managed to get out of abject poverty and in spite of his blindness to world famous artists. José Feliciano was a bit surprised due to the success of the Christmas carol, but he knew that anything is possible in life, when you think only of themselves.

Despite his disability José Feliciano always believed in itself and made it its own power to a celebrated music star. He mastered all the obstacles that were placed in his way, and is characterized by its attitude to life model for many people around the world.

José Feliciano: "I had to prove that I even was able to achieve everything I intended. And that I did. I think once people have noticed what I can, they have not seen me as a blind person "