The meaning of life for Christy Brown 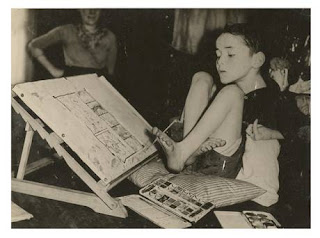 Christy Brown was in Dublin (Ireland) was born on 05 June 1932 as the child of a poor Irish working class family. However, he was paralyzed by birth complications and had a cerebral movement disorder. Without help he could not move and he was repeatedly shaken by seizure-like convulsions. In addition, Christy Brown could communicate only grunting, for this reason he was also regarded as mentally disabled and incapable as education. Only his left foot he could control himself, just as he wanted. The doctors stamped it off as a hopeless case, this was also the opinion of most people. Since there were difficult economic times, they advised the parents that they should give away her son in a nursing home, where he was allowed to languish the rest of his life. But they had not reckoned with the love of the mother, because in spite of her son's disability she looked at him as a full member of the family.

The mother dealt as best she could with her son, she showed him pictures and read him stories. In between, he had to be washed, fed or taken, but the mother had a strong will and did everything for her son. At the age of five years, Christy Brown did suddenly something amazing, he took with the toes of his left foot, a chalk and scribbled around on the small table to his sister. The attentive mother understood this as a sign that her son could see everything from the environment and was mentally fully at the height. The actually held as moronic Christy Brown now learned in years of effort the parent actually reading and writing. With incredible stamina he managed the time to write with his left foot and paint, and could now its environmental report.

Nevertheless, he was still dependent on the help of others. His brothers took him repeatedly in a simple carts with street from where Christy Brown could watch the kids play. As this, however, broke down, the family could not afford a replacement, and so he had to stay in the house again from now on. He was depressed because he wanted nothing more to be able to do as things that could other children do. The pain struck deep into his soul, because no matter what he could also try, he would never be able to truly be "normal". For Christy Brown it was a please knowledge, but this knowledge, it was she who should give him great power. For he said to himself, if he could really be like other people never, then he wanted to be himself and get the most out of it at least.

Under his crippled body an incredible artistic talent came to the fore and he began with his left foot to paint pictures. It not only made him happy, but he was able to inspire with these pictures, other people and was able to sell his works for money. He also wrote books that have been translated into various languages. With the money he made soon occupied a typewriter, which he could use the little toe of his left foot. With his own biography "My Left Foot", he landed an incredible bestseller. One day he met the nurse Mary Carr know and fell in love with it. It was the love of his life, and later they were actually married.

Christy Brown died on 06 September 1981 to a choking fit. His whole life was marked by the confrontation with his disability and for the meaning of life. Despite many difficult phases in his life, he managed to become a very important writer and painter who was known far beyond the borders of his country beyond. The key was his attitude to stand his fate and easy to make the most of his life, no matter what disability you have to fight. In 1989 a very successful film was made from his moving life story.

Christy Brown had only his mind and his left foot available, he still managed to inspire people in the world never to give up in life.