Would I run for those who want to give up in life, as I almost gave up 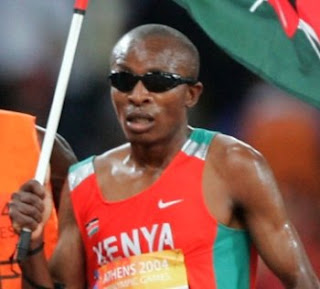 Henry Wanyoike was born on 10 May 1974 in Kenya (Africa). In the small town of Kikuyu, he grew up in poverty, as a place to sleep was just a simple shack. When his father died at the age of six years suddenly from malaria, it was the caring mother who gave Henry a relative carefree childhood and urged him to go to school. When he successfully managed the school, he began an apprenticeship as a shoemaker and shortly thereafter opened his own shoe shop. Henry Wanyoike was 21 years old and was full of plans for life, as a momentous blow overnight everything should change.

One evening was Henry still happily into bed at night, he woke up with a severe headache, however. Shaken, he realized that it was morning already and he could not see, however, soon. Henry had gone blind from the effects of a stroke and could see only dimly, what could read ordinary people from 60 meters distance from a meter away. For people in developing countries such blindness often meant abject poverty, but Henry had lucky to have a family behind him who could take care of him.

Henry Wanyoike: "It happened on May 1, 1995. In the evening I had slight symptoms of paralysis, and I went to bed seeing. I did not know that I had a mild stroke. In the morning, my eyesight was gone "

Due to this burden of always cheerful Henry lost all his joie de vivre. He knew nothing more to do with his life and fell into a deep sadness. Although physically he lacked nothing, the lost will to live got the strength in his legs. Severely depressed the young man spent the next two years in a wheelchair or on crutches moving. Henry saw no purpose in life and refused emaciated always the food. Because of the emergency situation and the risk of suicide came Henry in a special rehabilitation center, which was supported by the Christian Blind Mission.

Henry Wanyoike: "It took two weeks before I was able to accept the loss of my eyesight. Once I realized that I really was blind, I got mental problems "

In this rehabilitation center succeeded empathetic doctors and therapists, slowly grope at Henry. Gradually got Henry to deal with his fate and began to hope again for his life. He began training as a knitting master and discovered his passion for running. Already in his youth he had won a race, but had his hobby set aside for education. With its own training partner, who was connected to a wrist strap with Henry, so that Henry led, has begun running training. Henry had now discovered a new goal for himself, he wanted to take part in the 2000 Olympic Games for athletes with physical disabilities (Paralympics). Tirelessly and with unfassbarem will he increased his running intensity so far, that Henry in an eliminator race could actually qualify for the Paralympics.

Henry Wanyoike: "My enthusiasm for racing I discovered with about twelve years on my five kilometer walk to school. I dreamed of someday be a great and well-known runners "

Henry Wanyoike was very nervous, because the first time he took part in such an important contest outside his country. Because Henry had to have no great success up to this point, and was interested in a little of the unknown runners from Kenya. As the launch of the 5000 meters final of the Paralympic Games in Sydney (Australia) came, Henry missed because of his excitement almost the start, but with his guide runner he came slowly up to speed. And Henry Wanyoike stepped on the gas. With an incredible pace he overtook runner to runner and sat down at the front of the field. He was in a trance when suddenly his guide runner collapsed on the final lap. The pace had been too high for him, he simply had no strength. The potential gold medal seemed to be lost, the audience could grasp the misfortune hardly, and they could take it even less about what the Kenyan runners should prove in the next few minutes for an incredible willpower.

With an exceptional effort Henry pushed his own guide runner in the air and pulled him now itself towards the target. Again and again stumbled the lead runner, but Henry dragged him with tremendous energy on. The audience went crazy and the stadium began, Henry cheer loudly. Despite this delay made it Henry over all other runners to the finish and won sensational gold medal. Such a thing had never been seen before in history, the whole world admired the young Kenyan runners with great fighting spirit.

Subsequently Henry Wanyoike won many running competitions around the world and collected donations tirelessly and prize money, which he donated to various charities cents for cent in Kenya. Henry Wanyoike used his success and his popularity to help many poor and the needy in Kenya. From Kenyan President he was for this reason an award for most Kenyans of the year.

Henry Wanyoike was the hopeless case who had actually already done with life, as a model and source of hope for an entire country. For it it is not just about the victory in the race, but he is running to inspire other people to give up never hope in life. With this setting, it is a model not only for the people of Kenya, but for many disadvantaged people around the world.

"Would I run for those who want to give up in life, as I almost gave up," Henry Wanyoike