My arm hung straight in the water, The water was red 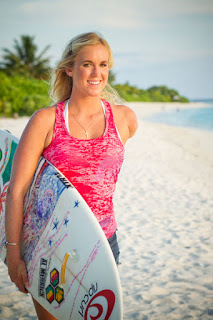 Bethany Hamilton was small enthusiastic on a surfer and had only the goal of someday becoming a famous professional surfer. Her parents supported this, and in Hawaii Bethany had always best training conditions. At the age of five years, the talented girl won her first competition, and further successes came soon. She was well on its way to becoming one of the best surfers in the world. Until that fateful day on 31 October 2003, where she was traveling as a thirteen-year with friends off the coast of Kauai, the northernmost of the Hawaiian Islands.

Early in the morning they paddled with rhythmic movements out to the ocean to enjoy a workout. In these waters there were many tiger sharks, which were relatively safe for many surfers, however. Nevertheless, there were repeated incidents, because seen from the bottom of the surfboard for a shark was difficult to distinguish from a seal or a sea turtle, the prey of the shark were. Bethany Hamilton thought also nothing wrong, because statistically there was less than one accident per year with a shark. But this should be a fatal fallacy. An almost five meters large tiger shark caught sight of Bethany Hamilton with her surfboard, and the animal would soon follow his natural instincts.

Without any warning, the tiger shark ripped through the surface of the water and tore the young junior surfer's left arm just below the shoulder from. As soon as the shark had come, he plunged even with his booty back under. The next few seconds were now critical to the survival of the young girl, which was difficult in shock. Presence of mind brought her friends back to the beach and tied with an ankle strap, which was on the surfboard, once its stump from. As Bethany Hamilton was hospitalized, she had already lost more than 60 percent of their blood, the doctors were fighting for their lives. And with luck, they stayed alive, but how should we go from there with her?

Bethany Hamilton: "My arm hung straight in the water, when suddenly the shark. I dimly saw something gray that dragged me back and forth. Then it dived, and the water was red "

Bethany Hamilton was devastated. When her the bandage was removed for the first time, the girl was in tears when she saw how much had really left yet from her arm. From another on the day she was taken out of her life, had only one arm and could probably abschminken her career as a surfer. The first sponsorship deals were worth nothing and they had no idea how they could get their lives back on track. One of the biggest young talents of the surfing scene already had to make in his early years on a new life design thoughts. But Bethany Hamilton was a fighter as you rarely find it in life. Her passion for surfing was so great that they already spoke again from surfing a few days after the accident. She wanted her dream to become a famous pro-surfer, not give up so easily.

Just three weeks after the accident, she began to train on the water with her father. She used this a longer and wider surfboard to facilitate her paddling. The left foot had thereby replacing the left arm, and again she lost the balance in the raising motion. Numerous failures they had to take, over and over again it was dropped from the surfboard. But with great effort and with extreme ambition, she managed step by step to keep the balance with only one arm. And over time they moved even back to the smaller and more restless PROFIboard, which was much more difficult to cope with.

Bethany Hamilton: "I imagined when people make with one hand pushups, then I can certainly also with one hand placed on a board. Man leans just not always back down, but stands upright "

Today Bethany Hamilton is indeed a professional surfer, she has realized her dream. With amazing self-evident they dive through the waves, despite their lack of arm with incredible elegance. They defied their fate and showed it to all skeptics who did not think it possible, with only one arm to surf on such a high level.

In 2004 she was awarded the ESPY award for Best Athlete Comeback of the Year and a special award for her courage. She wrote her story in the book "Soul Surfer" down, and this book was a template for the film industry, which filmed her moving story.

Bethany Hamilton: "I love surfing too much, as I could have stopped. My story is to inspire people around the world to the fact that they face the challenges "