God is my master

In the water lies a highly concentrated vital energy in the form of ethereal. Included are biophotons and medicinal information " 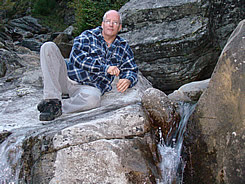 Urs Surbeck was born on 12 June 1958 in the city of Basel (Switzerland) and developed early the urge things from the ground up to explore and develop. As a child he dismantled complex movements and put them together again, for hours on end, he tinkered with broken equipment around to bring them back on track. Urs Surbeck followed his passion and trained as a machine mechanic, where he further specialized. As he waited for an environmental company pools and drinking water treatment plants, one day he came in contact with an old Russian water electrolytic device. However, Urs Surbeck could not repair the unit, because there were no more spare parts for it. So he set out to build a fundamentally new to the apparatus.

Urs Surbeck: "The units that came from the Soviet bloc, did not meet our technology standards"

Urs Surbeck translated ancient Russian documents and made it within a few weeks to build a finished device to disinfect drinking water in order to obtain a healthy, alkaline activated water. Unexpectedly, the machine of Urs Surbeck spread areally in agriculture. Farmers began to allow the drinking water for the animals to disinfect and wash the animals so. Suddenly animal diseases were increasingly rare and we did not need any more drugs by veterinarians. The fields that were irrigated with the treated water, brought a much higher yields. Fruit trees grew bigger and stronger, bringing an unimaginable crops. And this without the use of any harmful and costly pesticides. Urs Surbeck was fascinated by these developments and decided to continue with the water treatment and the nature of work.

Urs Surbeck: "The time in agriculture were my formative years and God is my master"

For Urs Surbeck this time was a test as to whether he did this work just for the money. But the success was expressed for him not in money, but he wanted the people, the animals and nature really help. So got Urs Surbeck one night a vision of how he could complete his water purification machine. He followed this inner inspiration and developed a device where a highly energized, ionized water could be treated in a natural way. With this cleansing power of the water, he scored soon results, which went far beyond the imagination of the people. Because water was not only the most important component of all human beings but also of animals and plants.

Urs Surbeck: "In the water lies a highly concentrated vital energy in the form of ethereal. Included are biophotons and medicinal information "

Brought to the hochenergetisierte water on aching places on, let the agony for a few minutes. Strong allergies, skin problems, rheumatism and many other diseases were successfully treated with the water. Gardener sprayed their crops with a special water, which then began to bloom within a very short time. The energized water also affected when highly concentrated in a sealed vial used it. Put the container in the refrigerator you disappeared, not just all bad smells, but the vegetables remained many days as fresh as the first day. The water was of course scientifically studied, and under the microscope could be seen having exceptional vibration pattern had this energized water. Despite great successes but Urs Surbeck was exposed to hostility.

Above all, the powerful pharmaceutical industry had it in for Urs Surbeck because the energized water was in direct competition with their products. But Urs Surbeck it was not discouraged and held meaningful talks, where he introduced himself a surprised audience, the operation of his energized water. He was thus able to satisfy its most critics that his basic Bioenergetikum could do wonders, without the use of any medications.

Urs Surbeck managed with its Energy Water to reconnect with nature. The fact that you could do without in animals and plants on drugs and poisons, they came no longer in the circulation of people. Urs Surbeck showed that health is not only better off people with a quality water, but also no longer hoped for quality of life returned. Through the tireless efforts of Urs Surbeck his vision spread of the healing effects of water in the world, to enable people, animals and the environment a liveable and better future. For in spite of scientific progress, there could be only one way and that led inevitably get back to nature.

Urs Surbeck: "There are many more areas of application such as Concrete, food, beverages, health and beauty industry "